IIM Amritsar inaugurates first PGP batch 2015-17 with 65 students; plans to move to own campus in 3 years 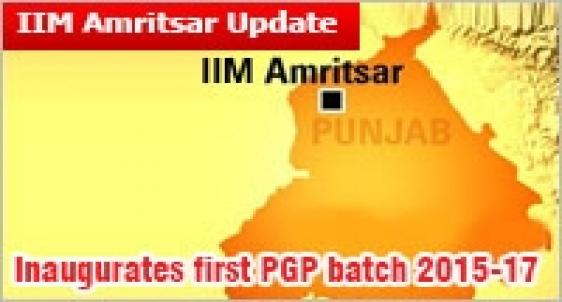 Students are the brick and mortar in building an institute. It is the students who largely shape the academic culture and dignity of the institutions Prof. Kulbhushan Balooni, Director, IIMK and mentor director IIM Amritsar

The Classes at Indian Institute of Management Amritsar, one of the six new IIMs that the Narendra Modi government proposed in the budget session 2014-15  will start this week from a temporary campus at the Punjab Institute of Technology, Amritsar.

Sharing his enthusiasm on commencement of operation at Punjab’s first premier management institute  Sardar Surjit Singh Rakhra, Minister of Higher Education and Languages, Government of Punjab addressed the first batch of students, parents, invited dignitaries and guests and IIM community and said, “I’m happy to  announce that out of the 6 new IIMs announced in India recently, IIM Amritsar becomes the second to be inaugurated. Punjab can become one of the leading states in education through IIM Amritsar. We must institutionalize IIMs and produce the best of human resources”.

IIM Nagpur is  the first IIM out of the 6 new IIMs that was inaugurated and commenced classes in the last week in  the month of July 2015.

Speaking during the inauguration, he appealed to the students, “Today the students of IITs and IIMs have excelled in various fields. IIMs play an important role to change the image of India.  We also need to provide quality education to the poor, if we are to become a global superpower. I know most of you would be looking forward to a career in the banking or the financial sector, but you must also look at agriculture and rural management.”

IIM Amritsar was given a final go ahead for the course this year upon the finalization of the permanent site for the IIM campus by a committee in late June. IIM Kozhikode, the mentor institute has with its vast experience, has put together the programme structure, systems and faculty within a month making it possible for the program to begin.

Speaking on the occasion Prof. Kulbhushan Balooni, director, IIM Kozhikode, said, “I would like to take this opportunity to thank the Ministry of Human Resource Development in initiating the process of starting IIM Amritsar in October last year. The Commitment of Government of Punjab in setting up IIM Amritsar is admirable that sends a signal to other States who are vying for academic institutions of repute.”

He further added, “Students are the brick and mortar in building an institute. It is the students who largely shape the academic culture and dignity of the institutions.”

IIM Amritsar hopes to move into their own campus of about 60 acres near Manawala on Amritsar-Jalandhar GT Road in the next 2-3 years.

Learning experience at IIM Amritsar
The faculty of IIM Kozhikode will be delivering courses at IIM Amritsar during the mentorship period. This may include a few visiting faculty selected by IIM Kozhikode to meet their exacting standards. The overall design, quality and delivery of PGP will be to the standards and with direct involvement of IIM Kozhikode. Candidates in the first PGP batch 2015-17 at IIM Amritsar should expect to see some of the best faculty members in the country today.

About IIM Amritsar
IIM Amritsar is the 15th IIM in the family of IIMs and is being mentored by IIM Kozhikode. Decision to set up an IIM in Punjab was announced in the Budget session 2014-15 by the then Finance Minister Mr Arun Jaitley. Later on it was decided to establish the IIM in Amritsar due its various location advantages.

IIM Amritsar has commenced its operations and activities in the transit campus located inside the Punjab Institute of Technology, Government Polytechnic Compound till its own infrastructure and campus is setup and ready for use. The facilities consist of classrooms, recreational space, activity rooms, library, computer and sports facilities. The transit campus is located close to Guru Nanak Dev University (GNDU) Campus.

Site for the permanent campus of IIM Amritsar is already provided by the Government of Punjab and finalized by the site-selection committee set up by the Ministry of HRD, Government of India. IIM Amritsar campus is proposed to come up at a site near Manawala on Amritsar-Jalandhar GT Road in 60 acres of land area.

The Hostel accommodation for Boys and girls are provided separately at different locations on twin sharing basis by IIM Amritsar.

About IIM, Kozhikode
Started in 1997 with its Postgraduate Programme (PGP), the Indian Institute of Management Kozhikode (IIMK) is on a high growth trajectory today, offering widest range of academic programmes in the field of management education. These include Fellow Program in Management, Executive PG Programs, Management Development Programs and Faculty Development Programs. IIMK set up a Satellite campus at Infopark, Kochi, in 2013 dedicated to Executive Education.