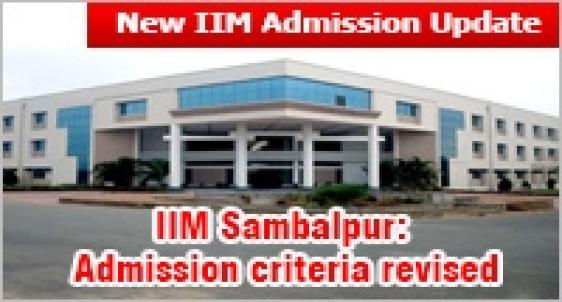 IIM Sambalpur has revised the admission policy for first PGP 2015-17 batch and has reduced the required CAT 2014 percentile from 96.3 to 90 to complete the admission process and fill the intake in the maiden session.

The requirement of high CAT scores to be eligible to get shortlisted by the 6 newest IIMs has resulted in vacant seats in the maiden flagship PGP batch 2015-17 at almost all the new IIMs. Anticipating the no interest for admission from the MBA aspirants, IIM Sambalpur in Odisha after struggling hard to get the candidates for the maiden flagship PGP batch 2015-17 has revised and lowered the required CAT percentile scores for all the categories.

MBAUniverse.com had already anticipated this no-admission situation and had warned against it but it appears only IIM Sambalpur has taken the lead in reducing the minimum required CAT percentile while other IIMs like IIM BodhGaya and IIM Sirmaur are still weighing the pros & cons of taking such a decision.

In fact the pitiable situation asks for the reduction of required CAT 2014 scores in admission to PGP 2015-17 by all the 6 new IIMs as none of the 6 new IIMs have been able to fill up the meager intake of 60 students in its first academic session. The problem may aggravate further in academic session 2016-17 after CAT 2015 result is announced and intake is further increased to 140 candidates in each of the 6 IIMs as per the Union Cabinet committee meeting decision taken on June 24, 2015 under the leadership of none other than the Prime Minister of India Mr Narendra Modi.

Since these new IIMs at Nagpur, Amritsar, BodhGaya, Sambalpur, Sirmaur and Visakhapatnam are in the process of streamlining the first academic sessions, their mentor IIMs should remember that vacant seats in IIMs can create a bad impact among MBA aspirants preparing for CAT 2015 and planning to get into these top rated B-schools.

IIM Sirmaur and IIM Visakhapatnam have been releasing their admission offers but the acceptance response from suitable candidates is not forthcoming in the desired number and in case the relaxation in admission criteria is announced for these new IIMs, they may continue with fewer students leaving a gap between admission takers and intake capacity.

Relax the admission norms; you are ill equipped
Comparing the newest IIM to their mentor IIM is like showing flickering flame to the Sun. It is not possible that the minimum prescribed admission criteria for both could be same. Even the oldest IIM does not prescribe 96 as the minimum CAT cut-off percentile. These new IIMs should prescribe a lower reasonable CAT percentile cut-off not beyond 90.

In the present scenario, IIM Nagpur can’t be at par with IIM Ahmedabad; IIM BodhGaya cannot be compared to IIM Calcutta; IIM Visakhapatnam must not be compared to IIM Bangalore; IIM Amritsar is no match to IIM Kozhikode; IIM Sirmaur has no comparison points with IIM Lucknow nor IIM Sambalpur should be compared to IIM Indore. It will take few years for all these new IIMs to stand on their own and become result oriented. The IIMs which began functioning in 2010 are still struggling and are in the evolution process. Their permanent campuses are not yet ready although 5 years have passed since they were established.

The earlier and revised CAT cut offs, (No change in sectional) in IIM Sambalpur admission policy 2015-17 for different categories are as under-

4 IIMs yet to begin session
While  academic session at IIM Nagpur and IIM Amritsar have begun, IIM Sirmaur, IIM BodhGaya, IIM Sambalpur and IIM Visakhapatnam are yet to begin their academic session 2015-16. In case the decision to revise the admission policy of these IIMs is not taken early, it is possible that they will have to face the shortfall of students in their class rooms.

The site at Basantpur in Burla in Sambalpur is the  location for the permanent campus of IIM Sambalpur and Silicon Institute of Technology, Sason, is the site for the temporary campus for IIM Sambalpur in Odisha.