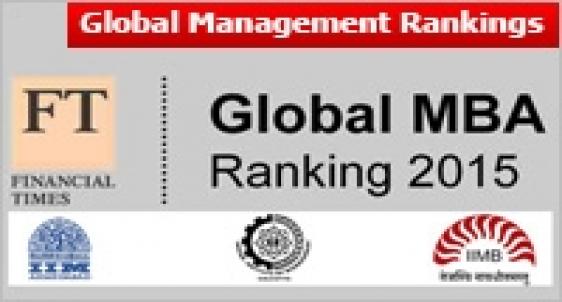 Indian Institute of Management (IIM) Ahmedabad has been ranked 15 overall going up one place from the 16th place in 2014 and 3 places up from 18th place in 2013 in FT Global Rankings.

Another silver lining is that IIM Calcutta ranks at 1st position in terms of Career rank, on the basis of seniority of graduates and size of company.  IIM Ahmedabad ranks 1st  with 100% faculty having doctorate degree.

IIM Bangalore has been ranked for the first time during past many years in FT Rankings. The B-school has acquired 26th rank . The next ranking by Financial Times in 2016 would determine the upward or downward trend for IIM Bangalore on the prescribed parameters.

All the 3 IIMs were ranked at top positions with 100% in company internships. A few of the key parameters in award of Global rankings to IIMs and other top rated B-schools in FT ranking 2015 are as below

Indian Institutes of Management (IIMs) are taking various steps to make global foot prints like acquiring international accreditations from AACSB, EQUIS, AMBA; International student exchange programmes; introduction of supernumerary seats for international students; modifications and big changes in the admission policy. With the aim to achieve academic diversity,  more changes in Common Admission Test (CAT) 2015 the mandatory entrance exam for IIMs, have also been brought about by modifying the exam structure as well as the content.

IIMs have welcomed the ranking positions they have achieved in Global rankings as these rankings enable them to assess their performance in comparison to other top rated B-schools.

Stay tuned to MBAUniverse.com for more updates on IIMs