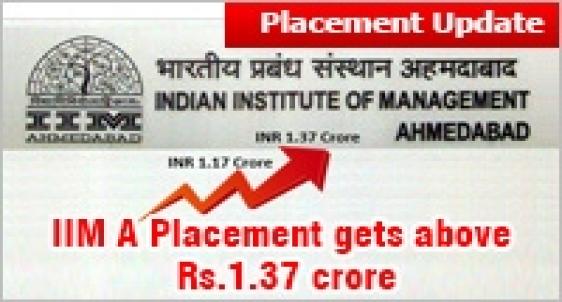 The placement report 2015 of IIM Ahmedabad released after audit from CRISIL has reflected higher domestic and international compensation packages to the students of its PGPX and PGP programmes with highest international package at US$ 207581 (More than Rs.1.37 crore) grabbed by the student of Post Graduate Programme for Executives (PGPX).

The placement 2015 process at IIM Ahmedabad was completed in the month of March 2015 but the top rated B-school of the country does not publish its placement data till the same is duly audited by CRISIL under its Indian Placement Reporting Standards (IPRS). It takes about 6 months to get the placement report audited and then the placement statistics of IIM Ahmedabad is released in public domain.

The maximum as well as the mean domestic placement 2015 packages at IIM Ahmedabad have gone up. IIM Ahmedabad PGP student got highest package of Rs. 53 lakhs in 2015 as compared to Rs 41 lakhs in 2014 marking an increase of 30%.

Out of the batch of 85 students in PGPX at IIM Ahmedabad, 67 students sought placement through the institute. While 53 students got domestic placement, 3 got international placement with high packages and 11 preferred to explore entrepreneurship opportunities.

Accensure Strategy was the top recruiter in placement 2015 at IIM Ahmedabad as it selected 21 students from the campus. Amazon extended 13 offers and McKinsey & Company, Boston Consulting Group, Yes Bank and Samsung extended 10 offers each. Bain & Company and Bharti Airtel made 9 offers each followed by Aditya Birla Group and Future group with 8 offers each.

Hindustan Unilever and Star TV India made 6 offers each followed by Goldman Sachs with 5 offers.

The placement process 2015 at IIM Ahmedabad was completed in 3 clusters beginning in February and getting over on March 1, 2015. Placement 2015 according to IIM Ahmedabad, with the concept of ‘dream application’ allowed students to choose the sectors and functions of their choice for their final placement.

CAT 2015: Girls get priority in test centre allocation; female candidate number may shoot up in IIMs

IIM Ahmedabad: Dream destination of MBA aspirants; USPs are more than those visible