MBAUniverse.com News Desk | :
September 24, 2015
The inauguration and orientation to the batch comprising 40 boys and 9 girls was held on Sept 23, 2015 at the temporary campus of IIM Sambalpur in the premises of Silicon Institute of Technology 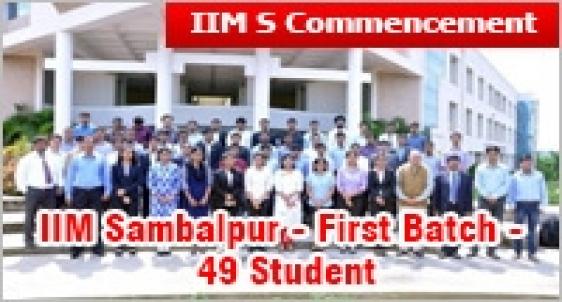 Keeping intact the announced time line to launch the first PGP 2015-17 batch in September 2015, IIM Sambalpur in Odisha has taken off  with 49 students against the total intake of 60 students as declared in its admission policy. The inauguration and orientation to the batch comprising 40 boys and 9 girls was held on Sept 23, 2015 at the temporary campus of IIM Sambalpur in the premises of Silicon Institute of Technology. Regular classes at IIM Sambalpur have started today on Sept 24, 2015. IIM Indore has been assigned the responsibility to mentor IIM Sambalpur till it moves to its permanent campus at Sambalpur.

On the occasion of inauguration of IIM Sambalpur Odisha Technical Education Minister Sanjay Das Burma handed over to the District Collector Balwant Singh, the documents transferring 200 acres land for free to IIM Sambalpur by Government of Odisha to construct its permanent campus at Basantpur.

According to Nagendra Kumar Pradhan, member of parliament, Sambalpur an airport to get the airport connectivity to Sambalpur would be ready soon at Jharsuguda and Rs.80 Crore to turn the dream into reality have been sanctioned.  Principal Secretary  Skill Development and Technical Education, government of Odisha L N Gupta has congratulated IIM Sambalpur on commencement of operation with the hope that the IIM will be an institute for imparting quality education to the students.

One of the 6 new IIMs announced by Government of India, to be established and to commence operations in 2015, IIM Sambalpur is still waiting for 11 more suitable students to complete the intake for the maiden PGP batch 2015-17. It is expected that as per the decision of Union Cabinet Committee the intake at IIM Sambalpur would further increase to 140 students in 2016 and this will call for the well devised admission policy plus accommodation space for the next batch.

The issue of getting so many suitable candidates and getting class rooms as well as hostel accommodation to such a large number in 2016 shall have to be planned by IIM Sambalpur well in advance.

IIM Sambalpur to have 3 year mentorship from IIMI
It would take around 6 months to one year to appoint a director for IIM Sambalpur as the Board of Directors would have to be constituted first. The recruitment of faculty would begin only after completion of this process. Accordingly IIM-Sambalpur would need 3 years of mentoring from IIM Indore.

The faculty from IIM Indore would be delivering courses at IIM Sambalpur during the mentorship period and till IIM Sambalpur own faculty are recruited.

The overall design, quality and delivery of PGP course will be to the standards and with direct involvement of IIM Indore. Students at IIM Sambalpur will see some of the best faculty members in the country today.

IIM Sambalpur: Revised Admission criteria
Out of the 6 newly announced IIMs, IIM Sambalpur has the most rational admission criteria requiring a minimum CAT percentile of 90, instead of 96.3 needed by others to short list the candidates. The filling up of intake upto 49 students at IIM Sambalpur is the outcome of this rational admission policy. Other new IIMs are still struggling to fill their seats but have not reduced the requirement of minimum CAT percentile from 96.3 except IIM Visakhapatnam which also has the rationalized admission policy.

The admission offers in each IIM are independent of others and therefore accepting or rejecting an offer from any other IIM would not affect chances in IIM Sambalpur, or vice versa.

Classes at IIM Sambalpur will be held at the temporary premises allotted to it at Silicon Institute of Technology, Sambalpur and will continue there till the 200 acre campus of IIM Sambalpur gets ready.