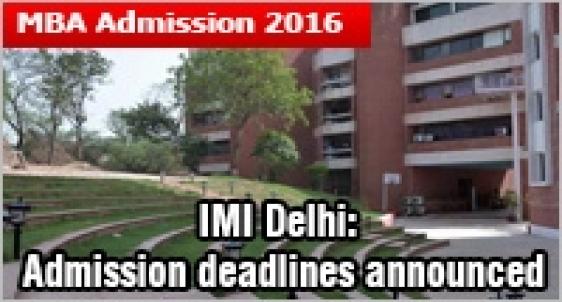 There will be 360 seats in admission 2016 at IMI Delhi for the 2 year full time PGDM programmes, Executive PGDM intake will be 129 seats

International Management Institute (IMI) Delhi has announced the application deadlines for admission to flagship PGDM and 15 month executive PGDM programmes beginning 2016. The highly ranked B-school will accept only CAT and GMAT exam scores as one of the mandatory admission criteria. While there will be 360 seats in admission 2016 at IMI Delhi for the 2 year full time PGDM programmes, Executive PGDM intake will be 129 seats bifurcated into self sponsored and company sponsored candidates.

Mandatory entrance exam
IMI Delhi will accept the scores of Common Admission Test (CAT) 2015 to be held on Nov 29, 2015 or GMAT for admission to the 2 year full-time Post-Graduate Diploma in Management (PGDM) 2016-18 batch. Indian residents who have appeared for GMAT, not earlier than December 2013 and not later than December 2015 are eligible to apply.

Application process & deadline
The deadline to apply for admission to flagship PGDM programmes 2016-18 batch at IMI is Dec 5, 2015.

Application form is available at IMI website and must be submitted online. IMI does not accept Admission applications off-line. Aspirants desirous of seeking admission at IMI should apply by registering online at Institute website

The admission application fee is Rs. 2000/-. An applicant willing to apply for more than one program at Delhi Campus will have to pay Rs.2000/- towards the cost of application form.

The admission fee can be paid through Credit Card/ Debit Card/Bank Transfer through the designated payment gateway. Payment can also be made by Demand Draft, drawn in favour of International Management Institute, payable at New Delhi, giving the IMI Application Form number, program and campus reference on the reverse of the Demand Draft.

IMI will short list the candidates on the basis of information provided in the application form, CAT scores  (sectional  and  overall)  or  GMAT  score,  educational  background,  marks  in  10th,  12th, graduation and  work experience.

IMI: Ex PGDM
The Executive Post Graduate Program at IMI is a full time Program spread over 15 months. The programme is approved by AICTE as full time MBA and is accredited by AMBA (Association of MBAs) and SAQS (South Asian Quality Assurance System).

-- A minimum 5 years of full time, post-qualification, experience as on March 31, 2016 is also mandatory and the candidate

-- Proficiency in written and spoken English

-- Admission application fee is Rs.1500 and is non-refundable

IMI Delhi is one of the top rated B-Schools in India. The institute is accredited by Association of MBAs (AMBA). IMI has academic collaborations with many top rated foreign B-Schools like McGill University, Montreal, Canada; and Manchester Business School, U.K.  IMI Delhi records excellent placement year after year.

Stay tuned to MBAuniverse.com for more updates on IMI Delhi