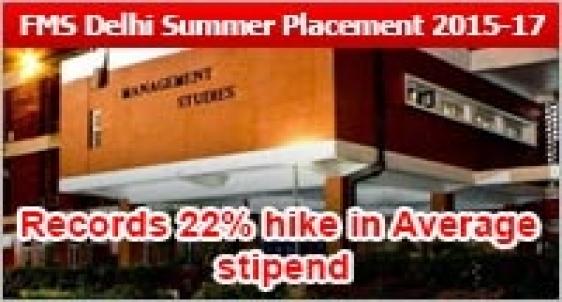 FMS Delhi concluded the process of summer placement for fresh MBA batch 2015-17 with 22% rise in average stipend and more offers by more recruiters. The Summer Placement Process 2015 at Faculty of Management Studies, University of Delhi reinstated FMS stature as one of the premier high ROI B-Schools in the country. Continuing its legacy of securing stellar placements, both in terms of the compensation and the wide variety of profiles on offer, this year’s summer placement season at FMS Delhi saw companies opening multiple profiles and recruiting in large numbers. This has led to FMS securing 207 offers for the batch of 2015-17, ensuring 100% placements.

Before the onset of the Summer Placement Process, the aspirants were made to give their preferences for the kind of company and the profiles that they were aiming at. This was then matched with the preference given by the Company after they had made the offer to the candidates. It was done to achieve the ‘best fit’ between the person and the job which would be advantageous both to the company and the students. It also helped the team to maintain a high degree of transparency in the process.

More new recruiters
The current year witnessed 54 new companies participating in the summer placement process as against 36 last year. This opened multiple profiles across a variety of domains and ensured plenty of choice for candidates to pursue careers in the field of their preference. While continuing to be one of the top campuses for Finance & Marketing domains, Consulting and General Management have also started to gain ground over the recent years. A lot of niche finance roles were also offered this year by a number of PE/VC firms.

Despite the uncertain economic environment, 117 companies across sectors confirmed participation at FMS to choose from amongst the best minds in the country. However, the final tally stood at 76 for 207 students participating in the process.

According to Dr Kavita Singh, Placement Convenor FMS Delhi “The season saw greater participation from fast growing, emerging businesses, specially in e-commerce and consulting domains. The average stipend for the batch once again went up significantly. This stands testimony to the quality of students who graduate from the Faculty of Management Studies and the relevance of its curriculum to the needs of the world of business.”

-- All 207 students eligible for placements received internship offers with the average stipend rising to INR 72,051 per month, a 22% increase compared to last year

-- Offers from The Boston Consulting Group, Accenture Strategy and Deloitte USI combined increased from 9 to 16 over the previous year

Domain/Function wise Breakup
89 students at FMS Delhi opted for the Marketing profile; 45 for Finance; 25 for consulting; 22 for IT/Operations and ecommerce; 21 for General management and 5 opted for HR.

Marketing
FMS continues to maintain its position as a stronghold for the domain of Sales and Marketing. This year’s process saw the offers in the Marketing domain spread across a variety of sectors.

Social and Development Sector
For the first time in FMS History, there was participation from industry leaders in the social and development sector. Students showed great enthusiasm for roles in these companies in terms of student preferences as well as slots. The below - mentioned companies confirmed participation among others.