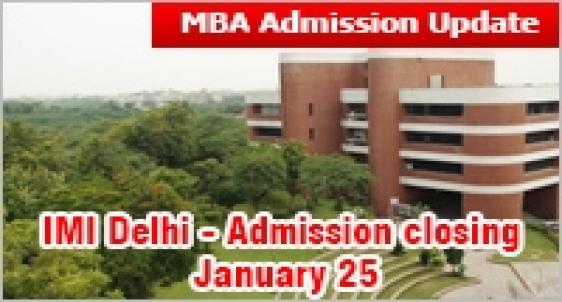 Acceding to the requests of CAT 2015 test takers whose result was out on January 8, 2015, International Management Institute (IMI) Delhi has re-opened the admission application process for its flagship PGDM 2016-18 batch for a few days and will close it on January 25, 2016. Highly ranked IMI Delhi will accept only CAT 2015 and GMAT exam scores as one of the mandatory admission criteria. There are 360 seats in admission 2016 at IMI Delhi for the 2 year full time PGDM programmes.

It is expected that a candidate with 90 overall percentile scored in CAT 2015 may get shortlisted for final admission round at IMI Delhi. Although sectional secores in CAT 2015 will also be considered for shortlisting, these scores of candidates at IMI Delhi may not be pegged rigidly as high as IIMs have prefixed them because of which even the 99 percentilers with deviation in sectional scores cannot hope to get shortlisted  even by the New IIMs who stand nowhere to the highly rated private PGDM B-schools like IMI, Delhi.

IMI Delhi: High placement 2016
IMI Delhi has a consistently maintained excellent placement record. The B-school has completed its final placement 2016 in a record time and probably earlier than many other top rated B-schools.

96 companies have participated in the Final Placements at IMI, New Delhi to recruit from a batch of 243 students comprising of 181 in the PGDM program, 45 in PGDM-HR program and 17 in the PGDM-BFS program.

IMI Delhi has recorded highest placement compensation for the PGDM 2014-16 batch of Rs.29 lakhs and average compensation of Rs. 14.3 lakhs showing an upward swing in the MBA market.

Mandatory entrance exam
IMI Delhi will accept the scores of Common Admission Test (CAT) 2015 held on Nov 29, 2015 or GMAT for admission to the 2 year full-time Post-Graduate Diploma in Management (PGDM) 2016-18 batch. Indian residents who have appeared for GMAT, not earlier than December 2013 and not later than December 2015 are eligible to apply.

Application form is available at IMI website and must be submitted online. IMI does not accept Admission applications off-line. Aspirants desirous of seeking admission at IMI should apply by registering online at Institute website.

The admission application fee is Rs. 2000/-. An applicant willing to apply for more than one program at Delhi Campus will have to pay Rs.2000/- towards the cost of application form.

The admission fee can be paid through Credit Card/ Debit Card/Bank Transfer through the designated payment gateway. Payment can also be made by Demand Draft, drawn in favour of International Management Institute, payable at New Delhi, giving the IMI Application Form number, program and campus reference on the reverse of the Demand Draft.

IMI will short list the candidates on the basis of information provided in the application form, CAT scores  (sectional  and  overall)  or  GMAT  score,  educational  background,  marks  in  10th,  12th, graduation and  work experience.

Stay tuned to MBAuniverse.com for more updates on IMI Delhi