MBAUniverse.com News Desk | :
February 8, 2016
Delay in announcement of the shortlist is creating more panic among the aspirants since all the top rated IIMs and other B schools accepting CAT 2015 scores have not only announced the shortlists but have also started the process of PI round 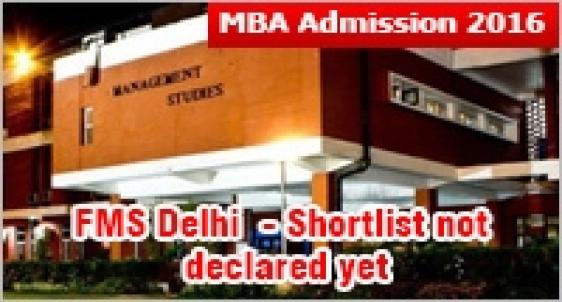 Thousands of candidates who have applied for admission to 215 seats in MBA programme beginning 2016 at Faculty of Management Studies (FMS) Delhi in anticipation of getting shortlisted for next stage of admission round at this high ROI B school of University of Delhi are still waiting to see their names figure among the shortlisted ones.

FMS Delhi has already announced that it would shortlist 10 candidates for 1 seat and going by the intake for MBA 2016-18 batch not fewer than 2100 candidates are proposed to be shortlisted. The delay in announcement of the shortlist is creating more panic among the aspirants since all the top rated IIMs and other B schools accepting CAT 2015 scores have not only announced the shortlists but have also started the process of PI round.

FMS Delhi still remains in waiting mode as the collection and collation of CAT 2015 scores is still under process at FMS Delhi. The B-school is in the process of receiving the CAT score of the applicants and the FMS Delhi will be announcing the cut-off only after completion of the same.

While 7 IIMs namely A,B,C,L,K, I, S and top rated Private B-schools like SPJIMR, IMI, IMT among others have started their final admission round, candidates desirous of getting opportunity of admission in MBA programme at FMS Delhi are keeping their fingers crossed for an early declaration of shortlist by this top rated B school in the country.

MBA Full time: Competition is tough
FMS Delhi has announced an intake of 200 seats for full time MBA 2016-18 batch. This intake after taking into account other factors go upto 220 candidates. Around 20000 candidates have applied for MBA (Full time) 2016-18 and rest for other MBA programmes. If we go by the ratio of number of MBA (Full time) applicants to programme seats there are around 100 applicants seeking admission on 1 MBA (Full time) seat in FMS for the batch 2016-18. FMS is supposed to shortlist the candidates in ratio of 1:10 i.e. about 2100 candidates for 200 seats in PI round for MBA 2016-18.

MBA aspirants in dilemma
The delay in declaration of shortlist for MBA 2016-18 programme by FMS Delhi has put into dilemma and is creating anxiety among the candidates who are hopeful to be shortlisted for final admission round at this B school. They are worried mainly due to the reason that all the top B schools might be through their PI round by the time FMS declares the shortlist. And in case their name doesn’t figure in the shortlist, they will have to seek admission opportunity in some 2nd tier B school where admission is open.

Although it is a fact that not more than 220 candidates will be finally selected for MBA 2016-18 batch at FMS Delhi, the shortlist will have 2100 candidates and out of this number, every candidate will have the opportunity to perform his best in PI round to be eligible to receive final admission offer. The anxiety due to the delay in declaration of shortlist, among the candidates, therefore is not out of place.

Components of PI round
FMS Delhi has already announced the components of final admission round for MBA 2016-18. According to FMS Delhi, ‘Admission to two year full time MBA programme will be based on Extempore Speech, Personal Interview and CAT-2015 (Common Admission Test) score’.

In view of Prof S K Agarwal Verbal Ability Expert and mentor on CAT preparation candidates anticipating their names to be shortlisted for final admission round at FMS Delhi should start preparing for extempore speech and personal Interview round even before the declaration of shortlist by FMS as very less time for preparation to the final admission round will be available once the shortlist is declared by FMS.

While the Personal interview is conducted in MBA admission final round at all the B schools, the component of Extempore Speech is not so common among IIMs or other top rated B schools. Extempore speech is the test of speaking skill. Clarity of thought and logical and coherent speech relevant to the topic is the key to score full marks in extempore. Whether you grasp the core of the topic and can speak without beating about the bush reaffirms your future managerial ability as a team leader.

The situation has changed now and the candidates with high sectional percentile in CAT 2015 may find their names among the 2000+ shortlisted candidates for MBA 2016-18 at FMS Delhi.

Please note there will be no Group Discussion (GD) or Written Ability Test (WAT) in final admission round at FMS in 2016. The extempore speech will have to be delivered during the Personal interview round. The candidate will be given some random topic during the course of interaction. Around 10-15 seconds will be allowed to think on the topic and the candidate will then have to speak for about 2-3 minutes on the topic. The most important tip for extempore speech is to avoid negativity in your speech.

Stay tuned to MBAUniverse.com for more updates on FMS Admission 2016