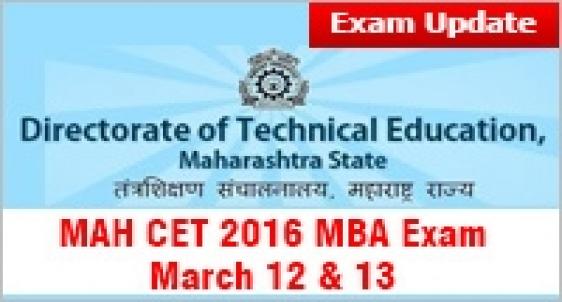 The registration and application process for MAH CET 2016 opened on February 12 and is proposed to close on February 23, 2016 at 5 PM

Registration opens: Feb 12
Online Registration for MAH CET 2016 through computer connected to Internet on the web site www.dtemaharashtra.gov.in/mba2016 has been opened on February 12, 2016. The registration process, according to the schedule announced by DTE Maharashtra will close on February 23, 2016 at 5 PM.

MAH CET 2016: A leading exam
Number of good B schools offer admission to the candidates based on MAH-CET scores. Around 45000 seats in various management courses across Maharashtra are filled up on the basis of MAH-CET 2016 scores. Candidates can explore better admission opportunity on the basis of MAHCET scores. Around 50 thousand candidates are expected to apply and appear in MAH-CET 2016.

In 2012 there were only 34 thousand seats for various MBA/MMS/PGDM programmes in Maharashtra, this number has now increased to 45 thousand.

Exam components
200 questions in MAH CET 2016 are proposed to be divided in following sections namely Verbal Ability and Reading Comprehension (English Language test); Quantitative Aptitude; logical and Abstract Ability. All the questions would be of MCQ type. Test takers may toggle among the sections without sectional time constraints.

The detailed information and the instructions about the MAH CET 2016 illustrating the nature, variety, scope, pattern, type of questions that will be set for the MAH CET 2016 would be shared by MBAUniverse.com shortly.

MAH CET CAP 2015: Don`t get carried away with confusing words of DTE; 5 precautions while applying