MBAUniverse.com News Desk | :
February 23, 2016
Placement 2016 at FMS Delhi saw the crossing of barrier of Rs.20 lakhs both in median and average salary offered to its students while the highest salary went up to Rs 66 lakhs 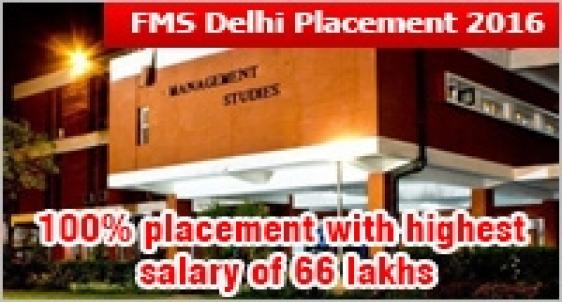 Placements at the Faculty of Management Studies this year are a clear reflection of the academic rigour at the institute along with the competence and quality of our students Dr. Kavita Singh Placement Convener FMS Delhi

Crossing the barrier of Rs. 20 lakhs both in average and median salary offered to its students, Placement season 2016 at Faculty of Management Studies (FMS) Delhi has yet again maintained 100%  record with higher packages and more offers. The highest domestic salary recorded at FMS Placement 2016 is Rs.66 lakhs while the average salary is Rs.20.5 lakhs marking a sharp increase over the last year.

Top recruiters at FMS Delhi in placement 2016 include EY Consulting with 13 offers; Accenture Strategy – 9 offers; Star India – 8 offers;  ITC – 7 offers and M.H. Alshaya – 7 offers. 37% of the batch has been placed in Consulting & General Management domain only.

FMS Delhi Placement 2016 has gone on record nullifying the speculation of economic slowdown and has again placed its MBA programme a shining star all around. Entire participating batch of 210 students got 220 placement offers in diverse domains at yet higher packages offered by more recruiters. According to Dr. Kavita Singh Placement Convener  FMS Delhi “Placements at the Faculty of Management Studies this year are a clear reflection of the academic rigour at the institute along with the competence and quality of our students. It goes a long way to prove the trust and confidence that the corporate world bestows on the institute and its students.”

FMS encouraging entrepreneurship
Releasing the final placement 2016 report Dr Kavita Singh, Placement convener FMS Delhi said “To ensure a smooth and transparent process for the companies, some important measures were taken. Firstly, a slotting exercise was done to democratically decide when a company would come in the placement process. Also, for the second year in a row, a scheduling algorithm was run in the placement process to optimally match the company and student’s preferences during the recruitmentexercise. To encourage entrepreneurship, FMS provides a placement holiday to students who wish to pursue their own ventures and allows them to participate in a subsequent placement process for up to 2 years, in case they want to avail the opportunity.”

FMS: Key Trends in placement 2016
FMS Delhi has a legacy of securing stellar placements, both in terms of the compensation and the wide variety of profiles on offer. Placement 2016 was no exception to this feat. 210 students out of the MBA batch 2014-16 comprising 223 students at this highly ranked B school participated in the placement process 2016 to explore placement opportunities. 13 students from the batch of 2016 opted to sign out from the Final Placements this season.

Average salary up
Proving again that there is no slow down for FMS MBA education, students of this highly ranked B school with high ROI grabbed higher compensation packages in placement 2016. The placement season 2016 at FMS Delhi saw a rise of 20% in average salary to Rs.20.5 lakhs from Rs.17.04 lakhs per annum last year, showing a rising trend in the MBA job market.  The median salary at FMS Placement 2016 also crossed Rs.20 lakhs recording a rise of 21% over last year.

Top 50% of the offers accepted by the FMS students recorded a rise of 25% with an average salary package of Rs.25.5 lakhs in 2016 rising from Rs.20.46 lakhs last year. The highest domestic compensation in Placement 2016 also increased to Rs.66 lakhs from Rs.35 lakhs in placement 2015.

Releasing the striking data in placement 2016, FMS has confirmed that average placement package was higher for Girls than Boys. While the average compensation for female stood at Rs. 20.9 lakhs it was Rs. 20.4 lakhs for male candidates.

Higher number of recruiters
Out of a total 147 participating recruiters who confirmed to participate in placement 2016 at FMS, 80 recruiters made 220 offers to 210 students.

Pre placement offers made by the recruiters in Placement 2016 were 60. However students accepted only 52 offers.

Finance
FMS saw a 30% increase in the number of roles in Finance offered to students in comparison to last year. With offers from Avendus Capital, Morgan Stanley and Spark Capital, Front-End Investment Banking roles accounted for 15% of all roles offered in Finance.

Since 1954, as one of the top management institutes in India, FMS has developed distinct brand equity. The learners here challenge assumptions, think beyond visible limits, and add the value of excellence in whatever they do. It was established under the aegis of the University of Delhi. It is situated in the heart of North Campus neighboring some of best colleges and departments of the university.

FMS Delhi is a high ROI B school. If you want to do your MBA from a Top leading Premier B School without burning a hole in your pocket, FMS Delhi is the ideal option for you. No other top rated B School in India charges fees as low as Rs.11,000/- per year for a full time MBA degree. On certain counts doing MBA from FMS Delhi is better than doing it from an IIM.

Admission 2016 to FMS Delhi is based on CAT 2015 high overall as well as sectional percentile scores. A candidate with 98+ percentile in CAT 2015 can expect to be shortlisted by FMS. The shortlist for MBA admission 2016 is about to be declared by FMS, Delhi.