IIM Shillong: Live WAT & PI round 2016; no bluff and straight answers are the success mantra

MBAUniverse.com News Desk | :
February 27, 2016
WSAT and PI round 2016 at IIM Shillong started in the beginning of February 2016 and shortlisted candidates were required to fill-in the Interview form and upload the same on IIM Shillong website 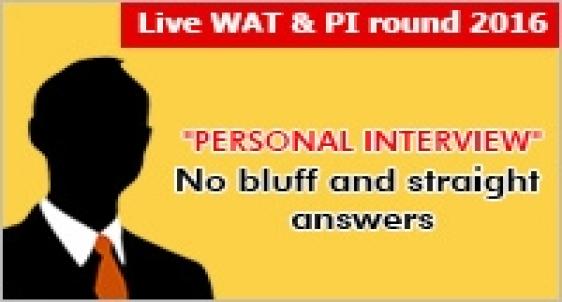 Aakash with an engineering background has scored 99.21 percentile in CAT 2015. While his percentile score in Verbal Ability and Quant sections goes beyond 96 and 99, he has a dip in DILR with a percentile in the range of 80+ only

The Writing Skills Assessment Test (WSAT) and Personal Interview (PI) round 2016 at IIM Shillong started in the beginning of February 2016 and shortlisted candidates were required to fill-in the Interview form and upload the same on IIM Shillong website. Only then IIM Shillong sent the WSAT & PI call letters to those shortlisted candidates who correctly filled in the Interview form. No communication was sent to applicants who are not short-listed for WSAT & PI. According to IIM Shillong, ‘Candidates, who appear in WSAT & PI will be able to view whether they have been offered admission by IIMS, tentatively by the second week of April 2016 by visiting the IIM Shillong website. Admission offer letter would be sent to all successful candidates.’

MBA Universe.com brings forth the real account of PI round held in February 2016 at IIM Shillong to help MBA aspirants going to appear in final admission round at the IIMs and other top rated B schools.

The live PI account will enable the aspiring candidates to assess their strengths and weaknesses and plug the loop holes in their preparation for their PI round. It will also help them to boost their confidence level. The name of the candidate has been changed to protect the identity.

Aakash with an engineering background has scored 99.21 percentile in CAT 2015. While his percentile score in Verbal Ability and Quant sections goes beyond 96 and 99, he has a dip in DILR with a percentile in the range of 80+ only. As a result despite having been shortlisted by other IIMs also, Aakash wouldn’t like to forego even the slightest opportunity to get the admission offer from any IIM.

Aakash has a good academic record as well as around 2 years of work experience in a supervisory cadre with a reputed company. He opted Delhi as his preferred place for the Personal Interview 2016. The WSAT and PI round for IIM Shillong of Aakash was scheduled in the afternoon session and was held quite recently.

Aakash preferred to wear black trousers, white shirt and navy blue coat giving a decent appearance. Reporting time for the interview was 1.45 PM but fearing traffic snarls Aakash reached the venue around 1.20 PM. There was good seating arrangement for about 50 candidates and their guardians at the venue. At 1.30 the process of verification of documents began and was over in a few minutes.

There were 3 panels for conducting Personal Interviews and each panel had 3 panelists. Aakash was the third to be interviewed.

Live account
Aakash enters the PI room after taking permission from the panelists. He stops where the chair meant for the candidate is placed. He greets the panel with a smile. The senior panelist asks him to take the seat which he does, not forgetting to convey note of thanks to the panelist.

P1: Tell us about yourself
Aakash: Sir, I come from a middle class family. My father is a teacher in Government Primary school and mother also teaches in a school nearby our house. I have 2 siblings. After completing my school education, I did B Tech from a lesser known Engineering college in Greater Noida. I got a job in Bangalore after completing my B Tech where I worked for one year and then I switched over to the present company in Noida.

P1: Why did you switch over to another company?
Aakash: Sir, I got a better opportunity here. Besides, it’s nearer to my native place.

P1: What is your role in your present job?
Aakash: Sir I am a team lead and have to make sure that the key job assigned to my team is completed with qualitative excellence well in time. (Explained his role profile in detail)

P1: What is Cryptography,give any example .
Aakash: Cryptography is a method of storing and transmitting data in an encrypted form so that only those for whom it is intended can read and process it. The term is most often associated with scrambling plaintext, I mean ordinary text into cipher text, then back again to plain text known as decryption.  Keeping the information in computers in some coded language, transferring money electronically through net banking could be cited as examples of Cryptography.

P1: What is the different security system?
Aakash: (Explained the software and hardware, the panelist looked convinced)

P1: What is Data Mining.
Aakash: Data mining is the computational process of discovering patterns in large data sets involving methods at the intersection of artificial intelligence, machine learning, statistics and database systems. The overall goal of the data mining process is to extract information from a data set and transform it into an understandable structure for further use.

P2: What is the difference between manager and leader?
Aakash: Sir, Manager minimises the weakness of team while leader maximizes the strengths. Manager look at the work in hand only while leader looks for opportunities and other motivational points.

P3 (takes over): Do you think that Government will be able to get the GST passed in the Budget session 2016.
Aakash: Sir, it is the number game that is preventing the GST from getting passed. Since the Government has a low strength in Rajya Sabha, it becomes difficult for it to get it through in the upper house. Hopefully, Government might manage to get it passed this session.

P3: What have you learnt with your total work experience?
Aakash: Replied with all the positive learning and also shared about my each and every project and learning from it.

P3: Thank you Aakash. We are done, any questions you wish to ask from us.
Aakash: Thank you Sir

(Takes leave and moves out of the room)

• How will you add value to this institute if you make it through?

• What will you do with your degree?

Stay tuned to MBAUniverse.com for more updates on GD-PI-WAT round 2016