MBAUniverse.com News Desk | :
March 7, 2016
The inordinate delay in declaring the shortlist at FMS Delhi is keeping the MBA admission seekers still waiting and without any clue to know whether they have been shortlisted for PI round 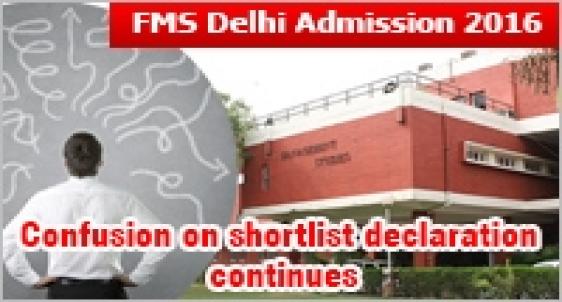 The high ROI and one of the most preferred B-schools in India, Faculty of Management Studies, University of Delhi has been keeping the admission seekers still waiting and without any clue to know whether they have been shortlisted for Personal Interview round for admission to MBA 2016-18 by this prestigious institute.

Changed criteria still simple; may not cause delay
The procedure to shortlist the candidates for PI round has been changed this year by FMS Delhi but it is still simpler than that of IIMs. While IIMs have almost completed their WAT & PI round and are getting ready to issue final admission offers, FMS is yet to declare the shortlist of candidates for the final admission round. According to Dr M L Singla, Dean FMS Delhi “We are still working on the shortlisting process.”

FMS Delhi will shortlist the candidates for PI round on the basis of CAT 2015 scores. Interestingly the result for CAT 2015 was declared on January 8, 2016 and it has been 2 months since then but the high percentilers of CAT 2015 who applied for admission to MBA 2016-18 at FMS Delhi have no clue if they have figured in the proposed shortlist of FMS or should continue exploring admission prospects in other B-schools.

Shortlist to have 2100 candidates
FMS Delhi proposes to announce the shortlist comprising 10 times of candidates to total intake. Since the intake for MBA 2016-18 batch is going to be somewhere between 200 to 220 students, there would be around 2100 candidates whose names will figure in the FMS shortlist.

To encourage diversity of Gender and Academic Disciplines, for the purpose of shortlisting candidates for Interview Process different weightages shall be assigned to the scores of different sections of the CAT 2015. A composite score shall be computed giving weightages of 30%, 30%, and 40% to the scores of Quant; DI-LR and VRC sections respectively as provided by the CAT Centre for the CAT 2015 Examination for candidates who have applied to FMS.

Is FMS waiting for IIMs to close the process?
It appears that FMS Delhi is going to declare the shortlist and begin admission process after IIMs and other top B schools close their PI round. This is based on the fact that FMS Delhi accepts only CAT scores for admission to its MBA programme therefore there is no other exam the result of which is awaited by FMS to declare its shortlist of candidates.

PI round over in IIMs
All the older IIMs namely Ahmedabad, Calcutta, Bangalore, Lucknow, Indore, Kozhikode and Shillong and all the 6 new IIMs declared the shortlist very much in the month of January/ February 2016 after declaration of CAT 2015 result. These B schools are on the verge of completing their admission process and will shortly offer admission letters to their prospective students for the batch 2016-18.

Not only this XLRI, SPJIMR, MDI and many other highly ranked B schools have almost completed their admission process. On the other hand, FMS Delhi is still lingering on and taking time to declare the short list. There is not even any indication when the B-school plans to declare the same.

Anxiety among aspirants
Delay in declaration of shortlist at FMS Delhi for MBA 2016-18 batch is causing anxiety among the MBA aspirants who wish to pursue MBA from this high ROI institute. The admission opportunities in top B schools might be over by the time FMS declares the shortlist. Not getting ready to get indulged in such dilemma of uncertainty in admission, the CAT 2015 high percentilers might accept admission offers from other B schools.

In case they are shortlisted by FMS also, they may or may not proceed and participate in the admission process at FMS given the fact that brand IIM commands a high reputation in management education. This anomaly might compel FMS to compromise on quality of stuff also.

The aspirants are now raising queries and searching various sites to know when FMS would be declaring the shortlist soon. Since neither the shortlist is declared nor the date for the same is shared, candidates are worried whether there would be as long a delay as happened in 2014.

FMS Delhi is probably the only B-school which has the lowest fee structure and very high placement packages offered year after year among the top rated B schools of the country including all the IIMs and this fact is the key attraction for the candidates searching admission opportunity to MBA 2016-18 at FMS Delhi.

Since it has been assured by none other than the dean of FMS Delhi that the shortlisting process is on, the FMS aspirants may expect the shortlist to be declared in a few days from now.