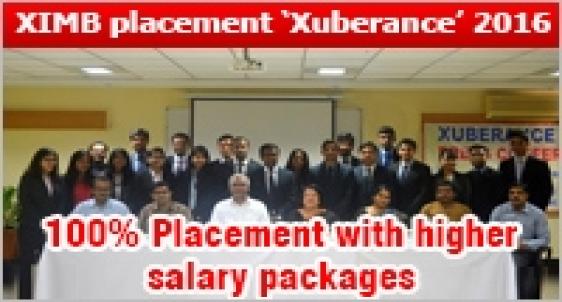 Despite the prevalent ever increasing competition, the students have performed admirably, garnering roles from numerous premier organizations XIMB Bhubaneshwar

Another consecutive year of 100% placement at Xavier Institute of Management (XIMB), Xavier University Bhubaneshwar (XUB) is the testimony of students’ mettle of this B-school. Placement 2016 at XIMB witnessed not only higher salaries but more recruiters making more offers across the domains.

XIMB has again achieved 100% placement for its current outgoing MBA batch 2014-16 and continuing with the tradition of high placements, the institute has scaled even greater heights as witnessed during this year's final placement process for XIMB, Xuberance '16. According to XIMB ‘Despite the prevalent ever-increasing competition, the students have performed admirably, garnering roles from numerous premier organizations. With increased pool of students, the industry has yet again reaffirmed its faith in our students by offering diverse profiles and niche roles’.

While organizing Xuberance year after year, XIMB has always taken pride in matching the aspirations of the future managers with the prestigious organizations of their dreams. Although XIMB began its placement process later than number of top rated B schools, but completed it much earlier than many of them. The placement 2016 reflected an upward swing in recruitment with more recruiters offering higher placement packages while the companies competed among themselves in offer of more jobs.

Key Trends in placement 2016
XIMB has a consistent record of high placements. The placement season 2016 was no exception to this achievement. Entire placement 2016 process at XIMB was well managed by the Placement Committee at the B school.

Average Salary up
Beating the slowdown in placement offers, the placement season 2015 at XIMB saw a rise in average salary to Rs.12.44 lakhs per annum for flagship MBA programme. The average compensation package for MBA-HRM stood at Rs.11.50 lakhs and for MBA-RM it was Rs.7.21 lakhs showing a rising trend in the job market.

The Industrial Relations area lived up to its ever rising expectations with prominent recruiters like Aditya Birla Group, GAIL, Tata Steel, Vedanta, and many more extending offers to the  students. Corporate HR roles were offered by leading organizations like HCCBPL, ICICI Bank, Wipro, Garware Wall Ropes and many more.

MBA-RM from the School of Rural Management, XIMB-XUB has become a sought after destination for recruiters from the banking and financial services sector. Various banks like Axis Bank and ICICI Bank attracted the best of financial minds

The consulting sector saw organizations like Price Waterhouse Coopers, NABARD Consulting Services, Deloitte, Sambodhi Research and Communication and Microsave rolling out offers for multiple roles to both freshers and laterals. The highest package at 11.38 LPA was offered by IFMR Capital, one of the new recruiters for Xuberance 2016.

Marketing
The Marketing area lived up to its ever rising expectations with recruiters like Amazon, Maruti Suzuki, Tata Steel, Spencer’s,SAB Miller, Idea Cellular,Vedanta, Bajaj Auto and many more, making their presence felt by recruiting 24%of the batch.

Finance
In the Finance stream, profitable jobs were offered to the students by major financial corporates like Arcesium India, HDFC,CRISIL, ICRA, Royal Bank of Scotland, Tata Capital, IIFL, SBI Group and many more,resonating the strong belief of the industry in the financial intellect of the students of XIMB.

IT
The Systems sector was the most eminent, with the major IT behemoths absorbing almost 35%of the batch. Major recruiters like HP, HCL Technologies, Wipro, Accenture Technology Services,Capgemini,Infosys etc. offered diversified roles in the IT sector to the young thought leaders of XIMB.

In the FMCG sector, Cavin Kare & GCMMF (AMUL) and agri input companies like United Phospates Limited rolled out offers in sales and marketing profiles. A significant number of students also opted to work in grassroots organizations and development sector companies like Rajeevika, Care India, and Jharkhand State Livelihoods Promotion Society. A whole new sector of CSR was added to our profile with Piramal Sarvajal.

XIMB has been successfully able to carry forward its rich legacy of producing young and dynamic business leaders, a testimony to which are the alumni of XIMB who are playing major roles in leading corporates. With 100% placements, the institute has helped all its students realize their true potential.

Xavier Institute of Management, Bhubaneswar (XIMB) was established 28 years ago. XIMB is now counted among the leading management institutions in the country. XIMB has been awarded A*** grading by CRISIL. The B school offers 2 years full time MBA; MBA in Human Resource Management (MBA-HRM) and MBA in Rural Management (MBA-RM).

Stay tuned to MBAUniverse.com for more updates on XIMB