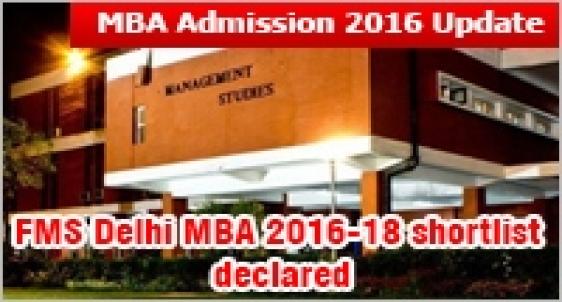 PI round comprising extempore speech followed by personal interview for MBA 2016-18 is scheduled to be held from April 12 to April 18, 2016

FMS Delhi has declared the shortlist for MBA 2016-18 batch comprising 2157 candidates who will attend PI round for admission to 216 seats. The shortlist was announced around 5PM on March 15, 2016 for MBA full time final admission round. The next stage of admission round is proposed to begin on April 12 and would continue till April 18, 2016.

Candidates have been waiting eagerly for the FMS shortlist for a long time after the CAT 2015 result was declared on January 8, 2016. All the top rated B schools and IIMs have already declared their shortlists and have also completed their PI round and the final admission offers are on the way.

Extempore/PI Dates
No GD will be held in PI round. Instead Extempore will form the part of PI round. The PI round comprising extempore speech followed by personal interview for MBA 2016-18 is scheduled to be held from April 12 to April 18, 2016. Shortlisted candidates are required to fill-up the proforma, available on the FMS website for appearing in Personal Interview.

Different shortlisting criteria in 2016
As against the shortlisting criteria adopted by FMS Delhi earlier, a different process of shortlisting has been arrived on the basis of composite scores awarded with sectional weightage to the candidates. The Composite Score has been computed by giving weightage of 40%, 30%, and 30% to the scores of VRC, DI/LR, and QA Sections respectively as provided by the CAT Centre for the CAT 2015 Examination for candidates who registered with FMS. For example: Composite Score = ∑(Score in Section * Weightage)/Max Marks for the Section.

FMS Delhi for the first time has considered award of weightage to sectional scores of CAT 2015. In earlier years only overall CAT percentile used to be the sole criterion to shortlist the candidates for PI round.
Accordingly, cut off composite score for PI round is 59.430 as against overall percentile score of 98.25 in last year shortlisting.

MBA 2016-18: Category wise composite cut offs
The shortlisting criteria arrived at, after calculating the CAT 2015 composite scores is as follows-

Category wise seats in MBA 2016-18
In total there are 216 seats available for MBA full time programme for the batch 2016-18 at FMS Delhi. The category wise bifurcation is as follows

Additional seats for foreign students
10 supernumerary seats are available for Foreign Students. Their admissions will be done on the basis of screening which will be done subsequently.

Documents required for PI round
Candidates appearing for PI round at FMS Delhi are supposed to send the duly filled-in proforma, along with the following documents by registered or speed post so as to reach Administrative Officer, Faculty of Management Studies, University of Delhi, Delhi – 110007

For the PI round 2016 FMS had already decided to shortlist candidates 10 times of the intake. According to Dr M L Singla Dean FMS Delhi, “For this year, FMS has decided to call candidates in the ratio of 10:1, i.e 10 Candidates for every seat in each category, as per the merit in the computed scores.”

The different shortlisting criteria, according to Dr M L Singla Dean FMS Delhi has been adopted “To encourage diversity of Gender and Academic Disciplines, for the purpose of shortlisting candidates for Interview Process different weightages shall be assigned to the scores of different sections of the CAT 2015.”

Stay tuned to MBAUniverse.com for more updates on FMS Admission 2016