MBAUniverse.com News Desk | :
July 1, 2016
CAT 2016 exam committee is likely to meet in the 1st week of July to finalise the structure, content and schedule of the largest MBA entrance test leading to 20 IIMs and other top B schools 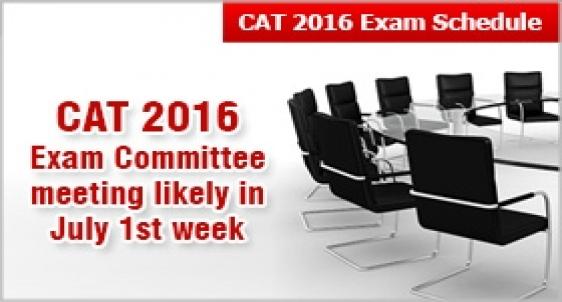 CAT 2016 exam committee is likely to meet in the 1st week of July to finalise the structure, content and schedule of the largest MBA entrance test leading to 20 IIMs and other top B-schools. There are number of things which would come up during the CAT 2016 exam committee as they remain incomplete even after CAT group meeting held in the month of June.

May announce Exam schedule
Till now there is no clarity on the proposed changes in the structure and content of the CAT 2016 exam pattern nor IIM Bangalore has shared the updates in regard to proposed schedule of the notification release, start and close of registration, issue of admit card and the exam dates among others. After the exam committee meeting, these items on agenda are expected to be finalized. The notification for CAT 2016 may be released in the 3rd or last week of July in accordance with the decision taken by the exam committee.

The CAT 2016 group meeting has although finalized the modilities to convene Common Admission Test (CAT) 2016 under the convenership of Prof Rajendra K Bandi, faculty IIM Bangalore, the remaining exam related decisions would be finalized in the forthcoming CAT 2016 exam committee meeting.

CAT 2016 is proposed to be conducted without any change in the testing partner agency - Tata Consultancy Services (TCS) who will remain the testing agency for the exam.

Changes expected in CAT 2016
In accordance with the legacy of CAT throwing a few surprises every year, it is anticipated that CAT 2016 will again bring about more changes. The prestigious MBA entrance exam CAT 2016 is expected to be further glorified with a little higher and different standard of testing in CAT 2016 clubbed with more innovations in the exam that may be incorporated by IIM Bangalore.

The computer based CAT 2016 exam is not expected to offer any facility with the off- line application process and all the registration activity will have to completed on-line only.

CAT 2016 Notification date: July end
The notification for CAT 2016 is expected to be out by the last week of July 2016 and the registration process for CAT 2016 would remain open for more than 45 days beginning from the first week of August 2016.

Besides, highly ranked Management departments at IIT Delhi, IIT Mumbai, IIT Madras and other institutes will also accept CAT 2016 scores for admission to their MBA/PGP/PGDM 2017-19 batch.

Higher Intake with more admission offers
IIMs and other top B-schools have increased their intake in 2016 and will further increase it in 2017. It will offer more admission opportunities in top B-schools of the country. High scores in CAT 2016 will enable about 45000 candidates to get admission in high ROI top tier MBA programmes of highly ranked B schools including IIMs in 2017.  Besides, even moderate scorers in CAT 2016 may also get very good B schools according to their scores and academic profile.

Common Admission Test (CAT) 2016 is proposed to be held in the month of November 2016. The 5 key components of CAT 2016 exam are – Verbal Ability; Reading Comprehension; Data Interpretation; Logical Reasoning; and Quantitative Aptitude.

The 5 components are clubbed into 3 sections as Verbal Ability & Reading comprehension form a single section and Data Interpretation and Logical Reasoning are clubbed into single section. The biggest challenge in CAT exam is to score a high and balanced score in each section to get shortlisted by IIMs. You may not get a call from any IIM unless you score above 80 percentile in each of the 3 sections. It is also possible that the number of sections and time duration in CAT 2016 may increase or decrease.

CAT 2016: How to crack tricky parajumbles; 4 approaches by Nishit Sinha with quick tips

CAT 2016: No need to stick to your MBA at lower rung B school; abandon and get the top IIM

CAT 2016: Impact of changes in past exams on test takers; get guidance before taking off-expert view

CAT 2016: How can a NOT-So-Intelligent Student crack CAT; know from expert Nishit Sinha

CAT 2016: The 5 changes aspirants demand from IIM Bangalore in conduct of test, structure and content