MBAUniverse.com News Desk | :
September 20, 2016
IMI Delhi has started the admission process to PGDM 2017-19 batch and will close it on December 12 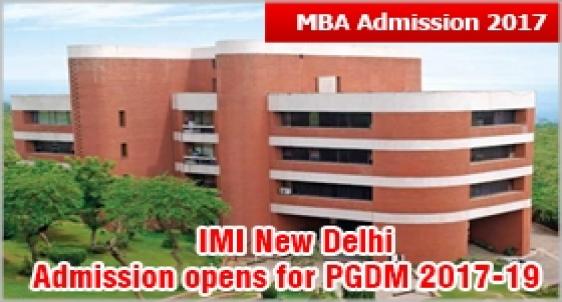 The top ranked among private B-schools in NIRF  Ranking 2016, International Management Institute (IMI) Delhi has announced the admission open for PGDM 2017-19 batch and has started the online application process. Candidates seeking admission to various PGDM programmes 2017-19 at IMI Delhi should apply online latest by Dec 12, 2016 apart from appearing in the CAT 2016.

Who can apply
The minimum eligibility to apply for admission to the PGDM Programmes at IMI Delhi requires you to possess a bachelor’s or equivalent degree, with a minimum of 50% aggregate marks or equivalent in any discipline, from a recognised university in India or abroad (recognised by the UGC / Association of Indian Universities).

Candidates should appear in CAT 2016 exam to be held on December 4, 2016 across the country apart from applying to IMI Delhi. Registration for CAT 2016 is proposed to close on September 22, 2016 at 5PM.

Work experience is not mandatory. Participants for the PGDM programme maybe fresh graduates from any discipline including Engineering, Humanities, Commerce, Economics, Medicine or any other branch of education or they may have relevant work experience also.

How to apply
Eligible candidates appearing for CAT 2016 or GMAT and seeking admission in PGDM 2017-19 batch at IMI Delhi can apply online only.

The application process for full-time Post Graduate Diploma in Management (PGDM) at IMI for the batch 2017-19 will remain open till December 12, 2016.

Applicant should complete the online application form and submit the same along with the admission fee of Rs.2000/- which is non-refundable and can be paid through Credit Card/ Debit Card/Bank Transfer through the designated payment gateway.

Shortlisting Criteria
IMI will short list the candidates on the basis of information provided in the application form, CAT scores  (sectional  and  overall)  or  GMAT  score,  educational  background,  marks  in  10th,  12th, graduation and  work experience.

IMI Delhi is the prominent and one of the top rated B-Schools in India. The institute is accredited by Association of MBAs (AMBA). IMI has academic collaborations with many top rated foreign B-Schools like McGill University, Montreal, Canada; and Manchester Business School, U.K.

Placement 2016 at IMI Delhi has scaled new heights with average salary going up to Rs.14.3 lakhs per annum while highest salary offered was rs.29 lakhs. Top recruiters among 96 companies who visited the campus and made placement offers include Accenture, Barclays, Capgemini, Cognizant, Crisil, J P Morgan among others.

IMI Delhi was ranked #1 among private management institutions and was ranked #7 overall by NIRF, Ministry of HRD, Government of India Rankings 2016.  In other top rankings also, IMI Delhi is ranked among top 10 B-schools of India.

According to Dr D K Batra, faculty and chairperson Branding & Media relations at IMI Delhi, the institute is distinct on many counts. He says, “IMI New Delhi’s diverse and experienced pool of faculty, having a rich combination of academic rigour and corporate exposure, is one of the Institute’s distinct strengths, making it one of the top institutes in the country in terms of intellectual capital.”

Please note that since CAT 2016 is the mandatory exam to apply for admission not only to IMI Delhi but also to other top B-schools, the candidates should register for CAT 2016 before September 22, 2016 as IIM Bangalore has clarified that there is no proposal to extend the last date of CAT 2016 registration.

Stay tuned to MBAUniverse.com for more updates on IMI Delhi