MBAUniverse.com News Desk | :
November 10, 2016
A close comparison among the top MBA colleges in India FMS, IIFT, IIML, SPJIMR, XLRI can guide you how to choose your dream MBA destination 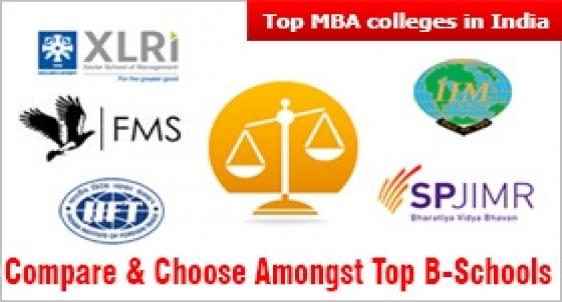 Top B-schools offer equal and even better opportunities with great learning experience, it will be much better to choose one of them who have proven track record and great USPs

Top MBA colleges in India do not refer to top IIMs only.  At par with highly ranked IIMs and in some cases better than these IIMs and offering yet higher learning and career opportunities at their campus exist top management colleges across the country. A close comparison among a few of such top B-schools like FMS Delhi, IIFT Delhi, IIM Lucknow, SPJIMR Mumbai and XLRI Jamshedpur will help you decide how to choose the best one out of them.

The admission opportunities in all of these top B-schools in Non-IIM category are open and will be finalized through different national level exams like IIFT 2016, CAT 2016 and XAT 2017.  While the registration process for IIFT 2016 and CAT 2016 stands closed, it is open for XAT 2017 till December 11.

One of the key points to remember is that all these top B-schools shortlist candidates on the basis of high percentile scores in their respective acceptable examination. For the benefit of MBA/PGDM 2017-19 aspirants, MBAUniverse.com compares among the top B-schools namely FMS Delhi, IIFT Delhi, IIM Lucknow, SPJIMR Mumbai and XLRI Jamshedpur to guide you in taking decision and apply to the preferred B-schools where admission process is still open. Those who have registered for all the 3 exams - CAT 2016, IIFT 2016 and XAT 2017 have the opportunity to get admission offer from all the above top B-schools.

FMS Delhi
Faculty of Management Studies (FMS) Delhi is one the oldest and top ranked B-schools in India of  University of Delhi. Probably the highest RoI B-school in India, FMS Delhi has a very low fee structure and highest placements. Application process for MBA 2017-19 at FMS Delhi is to close in a few days time from now.

FMS Delhi has a large alumni base who occupy top Corporate positions in India and abroad. Ranking positions awarded to FMS Delhi by The Week in 2016 is # 5 and by Outlook #4. The Business-Line MBAUniverse.com Ranking for top B-schools is under process and is to be announced shortly.

IIFT Delhi
IIFT Delhi is a leading research-driven management institution of India, established in 1963  under the Ministry of Commerce & Industry, with a strong international business orientation. With the status of deemed university IIFT has continued to prove its mettle in International Business management programme.

One of the key highlights in the IIFT Placement 2016 was  the rise in foreign offers from 13 last year to 15 this year as  foreign companies based in US, Singapore Middle-East, Nigeria & Australia have opted for IIFTians

IIFT conducts its own admission test every year.  IIFT MBA(IB) 2017-19 entrance exam is proposed to be held on November 27, 2016 across the country. The candidates scoring as low as 50 out 100 marks can expect to secure 99 percentile in the exam and get admission to the flagship MBA (IB) 2017-19 batch at Delhi or Kolkata campus.

IIM Lucknow
IIM Lucknow is one of the top 4 IIMs of India closely following IIM Ahmedabad, Bangalore and Calcutta.  IIM Lucknow proposes to reduce the class size to award higher importance to quality augmentation. Another key area is Research on which IIM Lucknow is working to increase it further to improve the national and international rankings.

IIM Lucknow shortlists the candidates on the basis of CAT scores. Accordingly, 2016 aspirants with excellent academic profile and seeking admission in PGP 2017-19 programme at IIM Lucknow should expect to be shortlisted even if they score a little low in CAT exam this year. IIM Lucknow has reduced the weightage to CAT 2016 scores in 1st stage shortlisting to 60% from 78% in last year. In the final selection also CAT 2016 scores will be awarded weightage of only 30%.

IIM Lucknow offers great learning experience and is compared much nearer to FMS Delhi, except for the fact that it has a higher fee structure than FMS Delhi.

XLRI, Jamshedpur
Ranked 4th among all the top B-schools and 1st among top private B-schools in India, in The Hindu Business Line-MBAUniverse.com B-school Rankings 2015-16, XLRI Jamshedpur has a legacy of 60 years and is one of the most preferred B-schools in India. Application process to the B-school goes along the XAT 2017 examination conducted by XLRI.

XLRI is one of the most sought after B-schools in India. XAT 2017 on the basis of which it accepts admission to its flagship PGDM 2017-19 programme is the second largest exam after CAT in the country. Almost all the XAT 2017 aspirants look forward to getting admission in XLRI.

Why only IIM? Think beyond
The admission criteria in IIMs sometimes don’t even shortlist you despite scoring 99 percentile in CAT. It is therefore always better to apply to other top B-schools also and don’t remain dependant on top IIMs only.

Please remember brand IIM has become a rat race for the MBA aspirants since better B schools as above have already made their global presence felt. Right from the beginning MBA aspirants work hard to get into one of the IIMs but despite scoring high percentile admission in IIMs remains a mirage. Other top B-schools offer equal and even better opportunities with great learning experience, it will be much better to choose one of them who have proven track record and great USPs.

You are supposed to take a decision at the earliest as the last date to apply for admission for all the remaining top B-schools is about to close in a month’s time.