MBAUniverse.com News Desk | :
November 16, 2016
Why IIM Bangalore has placed the new DILR section between Quant and VRC sections in CAT 2016 instead of making it the last of the 3 sections is not without purpose 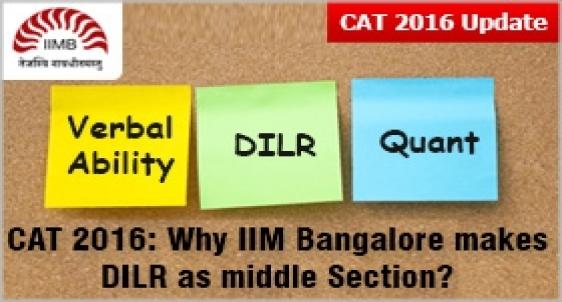 CAT 2016 will make you face DILR section after getting through the VARC section in 1st one hour and the next section, you will face is Quant which is again calculation intensive. Why IIM Bangalore has placed the new DILR section between Quant and VRC sections in CAT 2016 instead of making it the last of the 3 sections is not without purpose. The sequence of making VARC as the first section; DILR as second and QA as third section is not coincidental but has emerged after some deep analysis and thought process.

Each of the 3 sections will have individual time limit and sectional cut offs prescribed by all the 20 IIMs to shortlist you on the basis of scoring high. There is no more a supportive part as existed earlier in Quant and VRC sections.

Sitting continuously for 3 hours, using your brain in calculation, recalling various formulae, concepts, analytical skills, logical instincts will need a good amount of practice. IIM Bangalore has split the sequence of 3 sections to enable you to move first with language based questions followed by calculation based, analysis and reasoning based and then formulae and calculation based Quant section.

DILR: Spirit draining section
The fact that candidates find DILR questions more time consuming implies that you may not be able to solve many out of 32 questions in DILR section.

DILR section despite having 32 questions will test your analytical, comparative, reasoning and logical skills in a single section without giving you a chance to take a break to switch to Quant or Verbal questions.

Another message, the sequence of 3 sections in CAT 2016 conveys is that the dependence to compensate the score in one sub section from another one no more exists now.

Quant: Modify the strategy
Candidates who found Quant more difficult used to switch over to Data Interpretation question sets even when individual time constraint was there till CAT 2013 since DI was a part of Quant. CAT 2014 removed the sectional time constraints also so there was no problem in attempting any question from any section.

On the other hand those who found Data Interpretation more difficult, they could move to Quant part in section one. Both the sub sections helped to maximise your score in a single section, while you maintained your cool attempting quant or DI questions now and then.

This strategy relieved your stress level also. Data Interpretation questions despite being a bit time consuming could be learned and practiced well in a shorter time period.  In the testing lab, candidates preferred to attempt a few questions from DI part after attempting a major chunk of questions from Quant. A testimony to this fact is that number of  top rated preparation centres focused more on Quant and less on Data Interpretation. Candidates in self-preparation mode also were not so much worried about data interpretation part and used to learn and practice a few specific topics on related to DI sets.

But now in CAT 2016, once you begin with VARC questions, you cannot move to any other section till 1 hour is over. When you are attempting DILR section, your mind will be using all its capacity solving hard core exercises without any chance to visit QA part during the sectional time limit.

Unless and until learned and practiced, it gets difficult to continue with different type of conceptual and formula based calculations. However, there is no option left. So make sure that you have learned well and have practiced well on this section.

DILR as Important as VARC & QA
No more ignoring the DILR can be allowed. Out of 100 study sessions you used to have 80 on Quant and Verbal and only 20 were devoted to DILR. CAT 2016 requires you as good in DILR section as in other two. IIMs have also prescribed the same minimum qualifying sectional percentile for this section as for other 2 sections.

IIM Bangalore has placed this section immediately after Quant, so that you can move between Data Interpretation and Logical reasoning questions sets according to your convenience. If you are fed up with the calculations and data comparisons, better will be to go to Logical Reasoning part and after solving one or two question sets, make attempt to DI questions. The best way is to keep balance between both the sub parts, although IIM Bangalore has not specified to differentiate in DI-LR and both are supposed to be treated at par.

Please remember DILR needs more practice. If you practice on variety of DILR questions, you can win the race in this section. The section will have 2 questions less than in each of the 2 sections but the time allotted to solve this section is equal to Quant and VRC sections. A candidate should keep his cool and maximise the attempts to score high in this section. It is as important as the other 2 sections and will play the same role in determination of percentile.

The availability of 60 minutes could prove to be of no utility if the proper practice sessions on each topic are not taken with proper analysis.

CAT 2016: No pre-exam tutorial on D-day; only option is practicing with mock now

CAT 2016: No pre-exam tutorial on D-day; only option is practicing with mock now

Stay tuned to MBAUniverse.com for updates on CAT 2016