CAT 2016: How non-MCQs impact your percentile? Sensitive enough - wrong strategy to keep you out of IIMs

MBAUniverse.com News Desk | :
November 29, 2016
CAT 2016 is ready again to offer you with the opportunity to score high percentile with non-MCQ type questions or with the dire consequences of losing your score to a drastically low level 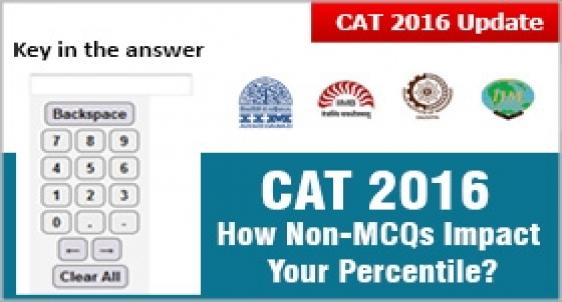 CAT 2016 exam on December 4 will be ready again to offer you with the opportunity to score high percentile with non-MCQ type questions or if you adopt a wrong strategy, with the dire consequences of losing your score to a drastically low level and go out of the race of getting into highly ranked IIMs, FMS Delhi, SPJIMR, MDI Gurgaon, IMI Delhi, IMT Ghaziabad among other top B-schools.

Non-MCQ types of questions are not followed by answer options. You have to solve them to arrive at the correct answer. These questions have no answer options available after the questions. Non-MCQs test your answering approach while arriving at the final answer of the question.

The biggest benefit to attempt a Non-MCQ in CAT exam is that the wrong answer does not impose any penalty of negative marking while MCQ type of questions followed by answers options impose penalty of 1/3 mark for each wrong answer. It carries your actual score down.
The shape and nature of Non-MCQ type of questions is such that the candidates need to type in the answer to questions in the given space on computer screen instead of clicking on the correct answer option.

The impact of Non-MCQs on your percentile in CAT 2016 could be greater than you anticipated as the candidates who solved more Non-MCQs without any fear of negative marking could score higher percentile than their peers. These candidates got shortlisted by not only IIMs but also by other top B-schools accepting CAT scores. The 28 Non-MCQs helped in pushing upwards the sectional as well as overall percentile without any imposition of negative marks due to wrong answers. This is in contrast to the more attempts to MCQs which are fraught with the risk of negative marking if their answers go wrong.

Non-MCQs: Percentile booster or damager?
You are well aware that percentile score is relative. It means you have to score higher than your peer to score a higher percentile. This will exactly happens when you attempt or leave the Non-MCQ type questions in CAT 2016 exam.

Analysing what impact could be there if you attempt more or fewer Non-MCQs in CAT 2016, Prof S K Agarwal, expert on Verbal Ability and mentor on CAT 2016 preparation, shares that the candidates who attempt more MCQs are fraught with the risk of more chances of negative marking leading to low scores and low percentile. The candidates who attempt more Non-MCQs have no such fear. If you attempt all 28 Non-MCQs out of which only 15 are correct, your raw score would increase by 45 leading to a great gain in percentile score. Besides, you will not face any penalty of negative marking even after typing wrong answers for 13 Non-MCQs.

Accordingly those who attempt more non-MCQs in CAT 2016 will score high marks leading to higher percentile score but those who confine to MCQs will lose and may score lower percentile as their raw and scaled scores will be lower due to negative marking.

For some of the CAT 2016 test takers, Non-MCQs will remain percentile booster and for others they will be percentile damagers. Had the non-MCQs not been there in CAT 2016, all the candidates would have been at par and instead of attempting questions without fear, they would think and choose the questions from their strong areas instead of opting for all the Non-MCQs indiscriminately.

Non-MCQs: Pick and attempt first-Toppers’ strategy
CAT 2016 aspirants should find out the Non-MCQs in each section and attempt them first before proceeding to MCQs. Harshit Goswami who scored 98.01 percentile in CAT 2015 and got admission to IIMU says “I targeted TITA - Type in the Answer questions first as they did not have any negative marking and were doable in less time and this left enough time for RCs”

To get the benefit of full weightage in Non-MCQs, you have to prepare well the topics without leaving anything to chance, says Prof S K Agarwal, expert on Verbal Ability and mentor on CAT 2016 preparation. According to him good deal of practice and taking more mocks on the lines of CAT 2016 sample test followed by error analysis is very important. Attempt CAT 2016 IIMB Mock Here

Chance to add 30% percentile
The number of Non-MCQs as revealed in the CAT 2016 sample test released by IIM Bangalore on October 25, 2016 comes to 28 questions spread over the 3 sections. It is expected that the same number of Non-MCQs would appear in the exam, although the slight sectional variation in their number may occur.

Before releasing the CAT 2016 sample test, CAT Centre 2016 shied away from revealing the expected number of Non-MCQs in CAT 2016.  However the CAT Centre 2016 has clarified on the scoring pattern for non-MCQs ‘For questions other than MCQs, 3 marks are assigned for ‘correct answer’ and no marks for wrong or no attempt’.

CAT toppers and experts alike suggest that to score high in Non-MCQs it is very much necessary to prepare the fundamentals and concept of the topic as without proper understanding you will end up putting a wrong answer in the given space on computer screen.

If we try to calculate, DILR section has 25% non-MCQs; VARC and Quant sections propose to have 29% non-MCQs each in CAT 2016

CAT 2016: Sectional submission may result in loss of score; understand how to avoid

IIM Tiruchirappalli: CAT 2016 gets 50% weight in Admission Criteria; 1st stage shortlist based on CAT scores only