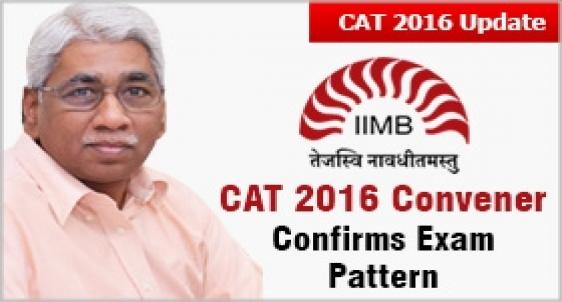 Some questions in each section may not be of multiple choice type, instead, direct answers are to be typed on the screen Prof Bandi CAT 2016 convener

It is official now! Just 2 days before the test, the CAT 2016 exam convener Prof Rajendra K Bandi, faculty and Admission chair at IIM Bangalore has revealed and confirmed the CAT 2016 exam pattern which is same as Mock CAT released earlier by IIM Bangalore. The convener’s office has also issued important instructions for CAT 2016 Admit card down load and necessary points to follow for the candidates going to appear in the exam on December 4.

In a release dated December 2, 2016, that details the communication made to the candidates, the Office of CAT 2016 Convener explained that the duration of the examination to be conducted on Dec 4 will be of 180 minutes duration and will be held in 2 sessions on the same day in 138 test cities in India.

CAT 2016 Exam pattern
Sharing the exam pattern, Prof Bandi convener CAT 2016 clarifies that there will be three sections in CAT 2016

Each section with Non-MCQs; shares CAT 2016 exam convener
According to the CAT 2016 convener Prof Bandi “Some questions in each section may not be of multiple choice type, instead, direct answers are to be typed on the screen. Test-takers will be allowed to use the basic on-screen calculator for computation. Candidates will be allotted exactly 60 minutes for answering questions in each section and they cannot switch from one section to another while answering questions in a section. Aspirants can refer to the Test Day Video and Mock Test available on the CAT 2016 website.”

-- CAT 2016 Admit cards can be downloaded from the CAT website (https://iimcat.ac.in) till the test day; admit cards will not be available for download after the completion of the test

-- Candidates have to reach the test centre by 7:30 a.m. (for the forenoon session) and by 1:00 p.m. (for the afternoon session); those reaching late (after 8:45 a.m. for the forenoon session/2:15 p.m. for the afternoon session) will not be permitted inside the test centre
-- Only CAT 2016 admit cards and original photo ID proof will be permitted inside the test hall
-- Applicants who have opted for using a scribe must also carry the duly filled Scribe Affidavit (available on the CAT website) along with the photo ID proof (original plus a copy) of the scribe
-- Admit cards (plus Scribe Affidavit, if applicable) will be collected by the test invigilator and will not be returned to the test-taker; these will be retained by the invigilator
-- Any kind of watch, mobile phone, earphones, microphones, pager, health-band or any other electronic gadget, any printed/blank/hand-written paper, pencil box, pouch, calculator, etc., is not allowed inside the test centre
-- Candidates wearing shoes or any other closed footwear will have to leave the footwear (including socks) outside the examination hall; they will be allowed to wear open footwear like sandals, etc.
-- On the day of the test, the candidates’ digital finger print scan will be captured; candidates whose finger prints cannot be digitally scanned due to reasons like application of mehndi/henna/any cosmetic colour, etc., will not be permitted to take the test; it is strongly recommended that candidates avoid applying mehndi on their hands (palm side) for at least five days prior to the test

All CAT 2016 applicants are strongly advised to be aware of the local weather conditions in their Test City (rains in Puducherry & Tamil Nadu, or dense fog in northern India), and plan accordingly to reach the test venue on time.

CAT 2016: Sectional submission may result in loss of score; understand how to avoid

IIM Tiruchirappalli: CAT 2016 gets 50% weight in Admission Criteria; 1st stage shortlist based on CAT scores only

CAT 2016: How 1/3 negative marking pulls your score down to 39 from 99; Learn the right strategy from CAT toppers at IIM