MBAUniverse.com News Desk | :
January 15, 2019
After a long delay, IIFT Result 2019 was released on January 15, 2019 for MBA (IB) Admission 2019. IIFT Result confirms that 2097 candidates have been shortlisted for final selection round for admission for 420 seats across three campuses. The names of shortlisted candidates were released yesterday. However, IIFT Scorecards is expected to be released after few days. 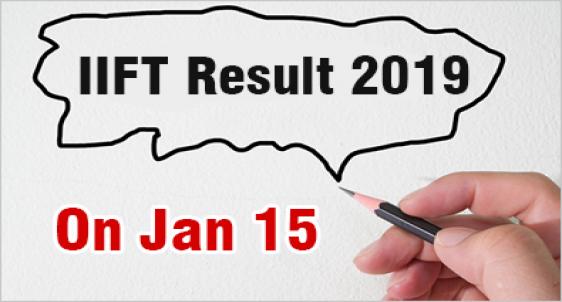 Indian Institute of Foreign Trade (IIFT) has released the result for its entrance exam held on December 2, 2018 for MBA (IB) admission 2019 on January 15, 2019. This comes after weeks of delay. IIFT Result was expected to be declared in first week of January. As per the past trends, IIFT Result declaration date used to be earlier than CAT result date. This is the first time that IIFT Result has been declared after CAT Result which was released on January 5, 2019. 2097 Candidates shortlisted
IIFT has shortlisted 2097 candidates for its 420 seats across three campuses. Candidates’ names are displayed on IIFT official website. You can also view the same on this link.

Break up of IIFT Seats by Campus is as below:

IIFT Placement 2019: First B-school to Conclude Final Placement
As reported first on MBAUniverse.com on December 26, 2018, Indian Institute of Foreign Trade was the first premier B-School in the country to announce its Final Placements 2019 for the graduating batch 2017-19 of its flagship MBA (International Business). Average salary for the large batch of 279 students has gone upto Rs.20.07 lakhs in Placement 2019 from Rs. 19.23 lakhs last year. International salary is up at Rs. 1 Crore..Read more 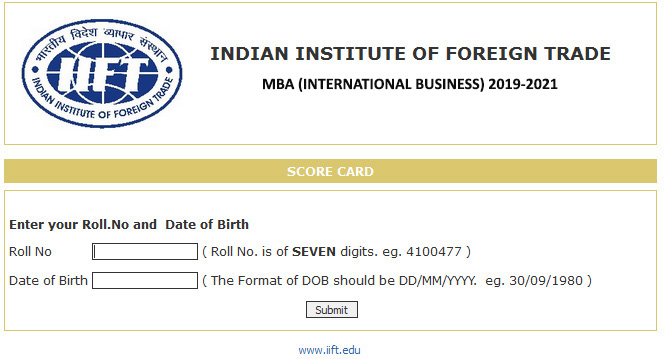 Please note that you should login with your IIFT roll number. The password is your date of birth as registered with IIFT in DD/MM/YYYY format.

It will display your IIFT score card for MBA (IB) 2019 admission. GD-PI-WAT round for MBA Admission 2019
After getting shortlisted on the basis of IIFT score card, the shortlisted candidates have to go through the rigorous process of IIFT final admission round which consists of Written Ability Test, Group Discussion and Personal Interview. The GD-PI-WAT round for MBA (IB) programme at IIFT will take place from January 2019 onwards and final admission offers will be sent by IIFT by the end of March.

IIFT entrance test for its most sought after MBA (IB) 2019-21 programme was held at 20 test centres across India in paper pen mode. The total number of questions that appeared in IIFT this year was 114 divided in six sections. IIFT doesn’t accept any other score than the score of its own entrance test for domestic candidates.

With an increased intake of 60 students for MBA (IB) 2019-21 at its Kakinada (Andhra Pradesh) campus, it is expected that more than 2100 candidates will be shortlisted for final admission round in IIFT Result 2019.

55000 Appeared in IIFT Exam
There were about 60000 candidates had registered to appear in IIFT 2018 entrance exam. Out of them 55000+ candidates appeared in the IIFT entrance exam for admission to 420 seats in MBA (IB) 2019-21 batch in three campuses of Indian Institute of Foreign Trade on December 2, 2018 and are now waiting for the IIFT Result date.

The Indian Institute of Foreign Trade (IIFT) was set up in 1963 by the Government of India as an autonomous organisation to help professionalise the country's foreign trade management and increase exports by developing human resources; generating, analysing and disseminating data; and conducting research.