East or West India is the best 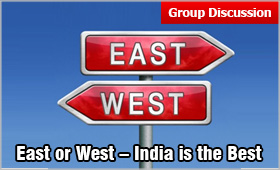 India is a Sovereign Socialist Secular Democratic Republic comprising 29 States and 7 Union Territories. India is one of the oldest civilizations in the world and is widely known for its rich and diverse culture. It is the fastest growing economy and also the largest democracy in the world. There exist a slew of factors which make India a distinguished nation. However, the country still needs improvement in a lot of critical issues such as poverty, literacy, rural development, population control etc.

Factors making India the Best
Multi Ethnicity: India is a multi state nation. The ethnicity varies with every state and region. India is home to thousands of small ethnic and tribal groups. There are 22 different languages that have been recognized by the Constitution of India. The vibrancy and diversity of India attracts is a major attraction for tourists worldwide.

Cultural Heritage: India boasts of a rich cultural heritage including its architecture, art, dance, music, philosophy, heritage sites etc. The very famous Taj Mahal is among one of the Seven Wonders of the World.

Climate: India offers diverse range of weather conditions in a short span of 12 months. The climate varies from winters in January to summers in March. The monsoons start from June onwards followed by a post monsoon season. The crops are also sown and harvested according to the different seasons.

Food: An eclectic mix of cultures, climate and tradition play a crucial role in the wide range of cuisine that India offers. It reflects an ideal blend of diverse cultures and ages.  Indian cuisine is profoundly rich in spices and fresh local ingredients. Indian curries are a top favorite of masses in India and abroad. India is one of the major food destinations of the world.

India needs Improvement
There are many critical issues concerning the socio economic, socio religious fabric of the country which need improvement to make India the best:

Poverty: Population of poor people in India is humongous despite it being the fastest emerging economy among the developing countries. According to the World Bank data of 2012 one in every five Indian is poor. It is a major hurdle in turning the larger Indian population into an asset.

Education: The literacy rate in India is 62.98% which is much lower than the other developing countries such as Indonesia and China with above 95% literacy rate. The investment as a percentage of GDP in education sector is as low as 3.3% as per the United Nations Development Programme. Not only the number of educational institutes is low but the quality of education imparted by the existing institutes is also a matter of serious concern.

Healthcare: According to a report “India HealthCare” by Mckinsey & Company, India lags behind in Healthcare sector on various factors. India has a shortage of trained medical workforce. According to the WHO guidelines the registered medical workforce density is 2.5 per 1000 population; it was 2.21 per 1000 population for India as on 2010. Even the healthcare infrastructure is below WHO guidelines. Though the government has announced an ambitious healthcare plan called Ayushman Bharat yet there is lot to be done in this field.

Population: India currently with 1.31 billion people is the world’s second most populous country, China being the first. However, India is expected to surpass China’s population by 2022. Thereafter, India’s population is projected to continue growing for several decades to 1.5 billion in 2030 and 1.7 billion in 2050, while the population of China is expected to remain fairly constant until the 2030s. These projections raise serious concerns regarding food shortage, unemployment, living standard and living space.

Pollution: Rising levels of pollution is a global issue. However, for India the rate is alarming. Among the world’s 20 most polluted cities in the world, 13 are in India. India is in the group of countries that has the highest particulate matter (PM) levels. Its cities have the highest levels of PM10 and PM2.5 (particles with diameter of 10 microns and 2.5 microns). These figures are six times more than the WHO “safe” limit of 25 micrograms. This calls for serious policy making in this sector.

Tips to clear GD Round on Abstract Topic
This topic in GD round is one of the hot probable topics and has been carefully chosen and solved with the sole aim to help you succeed in GD round. If you follow the few key tips, you can improve your chances to get through the GD round