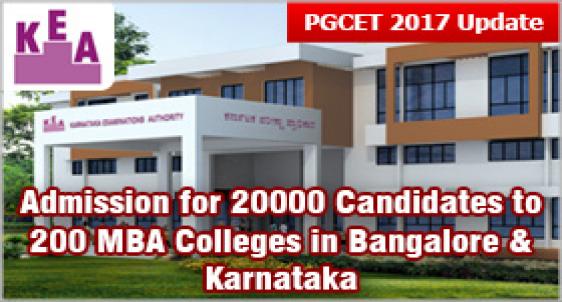 Post Graduate Common Entrance test (PGCET) 2017 in July will open gates for more than 20000 candidates seeking admission for MBA 2017-19. The MBA colleges accepting PGCET are also 200 plus located in Bangalore and rest of Karnataka.

Karnataka PGCET 2017 exam is proposed to be held in paper pen mode in the first week of July 2017.

The Karnataka PGCET is not considered a difficult exam and the candidates appearing in PGCET can crack the exam with high score with a consistent preparation without devoting too much of time. The best way to crack the PGCET 2017 is to take more mocks in paper pen mode test as the exam is very similar to MAT and KMAT. The experts are of the view that candidates should attempt and practice on MAT Mocks and KMAT past paper to improve their test taking skill for PGCET.

Karnataka PGCET 2017: All India candidates can appear
Karnataka PGCET is a popular exam for the students who want to pursue MBA from top MBA colleges in Bangalore and rest of Karnataka. The Karnataka Examination Authority (KEA) Government of Karnataka will conduct PGCET for admission to MBA 2017-19 and other post graduate programmes in July 2017.

The Karnataka state candidates as well as All India candidates can appear in the exam and explore admission opportunity to various MBA colleges in Karnataka with PGCET scores.
Admissions to the MBA programme beginning 2017 for Government seats shall be made in accordance with the Karnataka Selection of Candidates for Admission to Master of Business Administration and Master of Computer Application Courses Rules, 2005.

PGCET 2017 Exam Pattern
The PGCET-2017 exam will be held in paper pen mode in one session separately for MBA. The exam will have a duration of 2 hours with a maximum score of 100 marks. Each question will be of (Objective) Multiple Choice type. There will be 100 MCQs in PGCET 2016 and each will carry 1 mark.

The candidates have to mark the correct answers on the OMR answer sheet using BLUE OR BLACK INK BALL POINT PEN ONLY. PGCET 2017 will have NO negative marking in respect of wrong answers.

The exam will have 4 sections

Stay tuned to MBAUniverse.com for more updates on PGCET 2017