PGCET 2017: 90% marks in final exam not enough - Check your MBA admission Eligibility; application opens in May

MBAUniverse.com News Desk | :
March 29, 2017
PGCET 2017 eligibility criteria for MBA admission may prove to be more tricky than you think 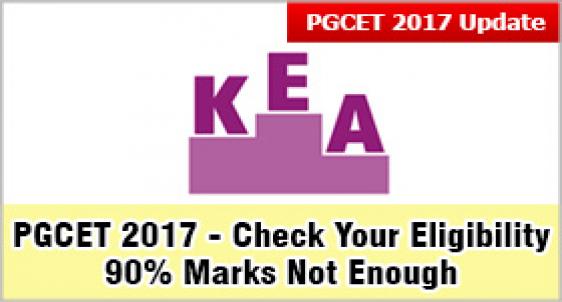 Karnataka State Post Graduate Common Entrance test (PGCET) 2017 eligibility criteria for MBA admission may prove to be more tricky than you think. Although the basic eligibility to apply for PGCET 2017 is 50% marks in qualifying exam, in fact, the eligibility has a catch and if you do not understand it well, you may not get admission to any MBA college accepting PGCET 2017 score.

Karnataka PGCET 2017 exam is proposed to be held in paper pen mode in the first week of July 2017.

Shortlist based on PGCET 2017 score
KEA has clarified ‘Based on the performance of the candidates in the Post Graduate Common Entrance Test, the rank list will be prepared and published for admission to MBA / MCA / ME / M.Tech / M. Arch courses.’

It implies that you will be shortlisted solely on the basis of your score in PGCET 2017 for counselling round. This is the document verification in counselling round where your eligibility would come to a test whether you will find your MBA college or will be out of the admission race.

KEA needs only 50% but 90% in qualifying exam not enough
According to KEA, the PGCET 2017 conducting authority ‘The candidates are advised to attend the counseling only if they have the requisite percentage of marks in the qualifying examination. (i.e., should have obtained 50% of aggregate marks of all the years of the Degree examination, 45% of aggregate marks of all the years in the Degree Examination in case of candidates belonging to SC, ST and Category-I of Karnataka Candidates).’

Implications of Eligibility clause
Eligibility clause in PGCET 2017 implies that you should have scored 50% or above marks in all the 3 years of your bachelor’s degree. If you have scored 40% in 1st year, 38% in 2nd year and 80% in final year of your graduation, although your average aggregate score is more than 50% for all the years, but your score in individual year is less than 50% and this is the catch in your eligibility that would not allow you to get admission to MBA or any other Post Graduate programme through PGCET 2017.

Calculation of eligibility score
The calculation formula for the score you have obtained in qualifying exam to become eligible for MBA admission through PGCET 2017 is shared by Karnataka Examination Authority with full clarity. According to KEA ‘Not only a candidate who has passed the qualifying examination with requisite marks but also a candidate who is appearing for the Qualifying Exam (Bachelor’s degree or equivalent) and expecting the results is eligible to apply for the Post Graduate Common Entrance Test – 2017.’

Karnataka PGCET is a popular exam for the students who want to pursue MBA from top MBA colleges in Bangalore and rest of Karnataka. The Karnataka Examination Authority (KEA) Government of Karnataka will conduct PGCET for admission to MBA 2017-19 and other post graduate programmes in July 2017.

The Karnataka state candidates as well as All India candidates can appear in the exam and explore admission opportunity to various MBA colleges in Karnataka with PGCET scores.

Admissions to the MBA programme beginning 2017 for Government seats shall be made in accordance with the Karnataka Selection of Candidates for Admission to Master of Business Administration and Master of Computer Application Courses Rules, 2005.

The Karnataka PGCET  exam is a paper based test with 200 MCQs. PGCET 2017 is not expected to be a difficult exam and the candidates appearing in PGCET can crack the exam with high score with a consistent preparation without devoting too much of time.

The best way to crack the PGCET 2017 is to take more mocks in paper pen mode test as the exam is very similar to MAT and KMAT. The experts are of the view that candidates should attempt and practice on MAT Mocks to improve their test taking skill for PGCET 2017.

Stay tuned to MBAUniverse.com for more updates on PGCET 2017