MBAUniverse.com News Desk | :
June 22, 2017
IIM Ahmedabad presented the third Young Alumni Achiever’s Awards today on June 22 to seven formidable Alumni under the age of 45 in three work areas including Corporate leadership, entrepreneurship and in public service The awards, started in 2015, are given to alumni to recognize outstanding achievements in various areas of work. 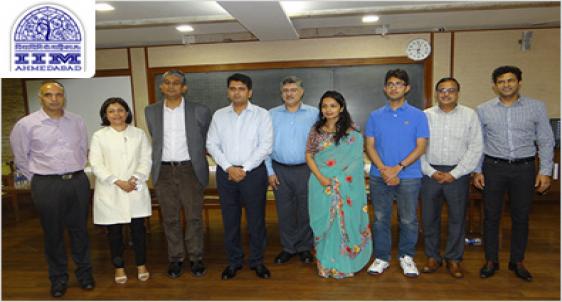 “These seven are representative of our numerous other alumni that are contributing as leaders and change agents in their organizations and communities” Prof. Ashish Nanda, Director, IIM Ahmedabad

In its 3rd IIMA “Young Alumni Achiever’s Awards ceremony, IIM Ahmedabad presented the award to 7 formidable Alumni that included top bureaucrats,  MD & CEOs, Founders, Directors. The awards, started in 2015, are given to alumni under the age of 45, to recognize outstanding achievements in various areas of work.

Speaking on occasion of Awards ceremony, Prof. Ashish Nanda, Director, IIM Ahmedabad said “The IIMA is recognizing contributions of seven of our young alumni, who have demonstrated leadership in a range of fields, spanning corporate, entrepreneurial, and public service contributions. These seven are representative of our numerous other alumni that are contributing as leaders and change agents in their organizations and communities. I am hopeful that the work done by these, and other alumni, motivates our students to contribute to society in meaningful ways.”

This year’s awards were given in following three different Categories. The categories are:

Mr. Rahul Agarwal, PGP 1996: MD & CEO of Lenovo India
Rahul Agarwal has over 20 years of experience in leading global and Indian business and marketing functions. As the global head of marketing communications for Lenovo from 2007 -2010, Rahul led the worldwide marketing communication, market research, product launches & analytics. Earlier experience includes leading the consumer PC launch project for Asia Pacific for Lenovo in 2006 and Launching the software range in Singapore and Malaysia for IonIdea.

Rahul has been leading Lenovo India's business since July 2015. As the CMO for Lenovo India, he launched the Lenovo brand. Joined IBM in 2001 as marketing manager for India and after 2.5 years, ran the India P&L of the PC business. Rahul did Bachelor of Business Studies (BBS) from Delhi University (1994) before getting diploma in management from IIM Ahmedabad.

Speaking at the Awards ceremony at IIM Ahmedabad, Rahul said “IIMA instilled in me a sense of competitiveness, an appreciation for rigour & clear thinking and a habit of hard work & detailing that I wasn’t used to earlier.”

Sudhir Sitapati, PGP 1999: Executive Director and CCVP, Refreshments, South Asia and Africa, Hindustan Unilever Ltd
39 years old, Sudhir Sitapati joined HUL in 1999 as a Management Trainee from IIM Ahmedabad. In the last 17 years, he has worked in various roles in Customer Development and Marketing across the Home and Personal Care (HPC) as well as Foods and Refreshments (F&R) categories.

Before his appointment as the Regional Category Vice President, Refreshments (South Asia & Africa), Unilever, Sudhir was the General Manager of Personal Wash Category for HUL. He brings a rich experience of working in diverse markets like Europe, South East Asia and Africa in addition to India.

On receiving the award at IIM Ahmedabad, Sudhir said “IIMA through its focus on problem definition and case studies triggered my love for marketing. I joined IIMA thinking I’d be a finance guy but left sure that I want to be a marketer.It’s wonderful to be recognized by one’s alma mater, but also a message to young MBA’s that being in one solid, old world company like HUL may not be a bad idea in the long term.”

Ms. Tulsi Naidu, PGP 1996: CEO  Zurich Insurance Company, UK.
Tulsi Naidu is a business leader with other 20 years of international financial services experience. In her current role, she is Chief Executive Officer of Zurich in the UK bringing together the life and general insurance businesses.

Before joining Zurich as Head of Business Development for the EMEA region, Tulsi held a number of executive roles at Prudential UK&Europe. Her previous professional achievements included leading the single largest Indian public sector divestment at the time as an associate at CSFB and working on a range of structured transactions at ICICI. She started her career at Arthur Andersen as a consultant.

Before obtaining her PGDM from IIM Ahmedabad she did her Bachelors in Mathematics, Economics and Statistics from Nizam College in Hyderabad. She is a Pilotlight Volunteer and Trustee and has previously served on BITC's Education Leadership Team.

Speaking at the Awards ceremony, Tulsi said “I am very humbled by this award.  I joined IIMA as a 19 year old and being offered a place felt like a great achievement then. Now looking back, I didn't really a ppreciate  how much those years were going to shape my life - the inspirational setting of the campus, studying alongside some of the cleverest people anywhere, meeting my husband and making other great friendships for life and the early job opportunities from placement providing a platform to a  challenging and very rewarding career over time.  Thank you IIMA.”

Ms. Sucharita Mukherjee, PGP 2001: Founder and CEO, IFMR Trust
Sucharita Mukherjee is currently the CEO of IFMR Holdings, is a Trustee and Vice Chair of IFMR Trust, and has been a part of the IFMR Trust Executive Group since 2008. She is a director on the board of all IFMR Trust group companies and was the founding CEO of IFMR Capital, from its inception till 2012. She has recently been appointed as a member of the India Advisory Committee to the UNEP Inquiry into a Sustainable Financial System.

Speaking on the occasion of receiving award at IIM Ahmedabad Sucharita said “I hope I am able to inspire many young people to pursue their true dreams. Don’t look at IIMA only as a platform to earn the maximum compensation. Compensation is not a great way to measure your worth, and you will likely never win that race. I hope I will set an example that following your dreams, being an idealist is fine. If you feel like you might be an idealist, you are not strange or stupid, in fact think of it as a gift, you will likely change the world.”

Mr. Yashish Dahiya, PGP 1996: Co– founder & CEO, PolicyBazaar
B.Tech from IIT Delhi, a PGDM from IIM Ahmedabad, and an MBA from INSEAD, Yashish started his career as a Business Unit Head at Illinios Tool Works and later moved on to Bain & Co. to work as a Management Consultant. Before starting his entrepreneurial journey with PolicyBazaar.com, he worked with First Europa, a Global Online Insurance Broker, as their CEO.

On the occasion of receiving award at IIM Ahmedabad, he said “IIMA gave me a set of friends and a very privileged network for life, along with the most respected brand name which made hundreds of things much easier than they would be otherwise. The award means a lot primarily because one me nominated by other alumni, and being selected from within such an esteemed group is just humbling. Also I would like more people to be entrepreneurs and hope to inspire them.”

Kartikeya Misra, PGP 2004: Collector and District Magistrate, East Godavari, Andhra Pradesh
Kartikeya Mishra is the 145th District Collector of East Godavari district. An IAS officer of 2009 batch, Kartikeya was director of department of Industries of the state, prior to the new assignment. Before joining PGP at IIM Ahmedabad, he did graduation in computer science from BITS Pilani.

Speaking on the occasion of Award Ceremony, Kartikeya said “IIM A helped me appreciate the centrality of hard work, courage, detail and humility in any endeavour. Campus has played a very important role in shaping me as a professional. Feeling honoured and privileged, I hope to live up to the expectations which this award brings with itself.”

On receiving the IIMA Young Alumni Achievers Award, Rohan said “IIMA is the place where I got real confidence. It made me realise how good the best were, and that I could benchmark myself against the best. It has given me a set of skills which are transferable and are relevant to any situation in life. This award means a lot to me - it is like a shishya getting recognition from his guru. A guru with no biases who feels that the shishya has lived upto his expectations. There is no bigger recognition than this.”

On the occasion, Prof Rakesh Basant, Dean, Alumni and External Relations IIM Ahmedabad said   “Through these awards the Institute recognizes and celebrates the achievements of our alumni who have made significant contributions in their workspaces fairly early in their careers. Every year, I get pleasantly surprised by the range and depth of the contributions our alumni have made. They have really made us proud.”

Established in 1961, the Indian Institute of Management, Ahmedabad (IIMA) is recognized globally for excellence in management education. One of the top management schools in the world, IIMA educates leaders of the enterprises. The Institute’s strategic priorities include: strengthening connection with its various constituencies, including academics, practitioners, alumni, and the community; nurturing a high performance work environment of stretch, autonomy, and teamwork; and strategic growth while maintaining emphasis on quality. As per the latest ranking by The Economist, IIMA is No. 1 School in the world on the parameter of opening up new career opportunities for students. The flagship Post Graduate Programme (PGP) is ranked 16th in the Financial Times Masters in Management Ranking 2016 and Post Graduate Programme in Food and Agri-Business Management (PGP-FABM) is ranked 1st by Eduniversal, Paris, France in 2017. As per the Financial Times’ Global MBA Ranking 2017, IIMA’s Post Graduate Programme for Executives (PGPX) is ranked 29th in the World.

Also See -
Top MBA colleges: Find the best MBA colleges in India across the regions with cut off, fee and placement
MAHCET MBA exam: Know all about MAHCET exam and MBA admission process in 400 B-schools
MBA through KMAT 2017: All about the last MBA entrance exam for admission in 2017 in Bangalore & rest of Karnataka
PGCET 2017: Karnataka Govt PGCET 2017 on July 2 for MBA 2017 open for all category candidates
CAT 2017 in changed pattern: Know all about CAT 2017 exam notification date, registration, pattern, IIM cutoffs
MBA Ranking 2017: Check MBA Ranking 2017 for top 100 B-schools in India to guide you in MBA admission decision