MBAUniverse.com News Desk | :
September 16, 2017
An inspiration to CAT 2017 aspirants in their preparation journey, CAT topper with 99.73 percentile and IIM Ahmedabad student of PGP 2017-19 batch Akhil Garg shares his experience on CAT preparation journey which he completed with self preparation 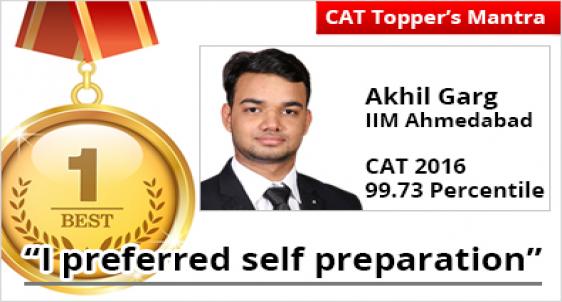 Putting a positive note to inspire CAT 2017 aspirants in their preparation journey, CAT topper with 99.73 percentile and IIM Ahmedabad student of PGP 2017-19 batch, Akhil Garg shares his experience on CAT preparation journey which he completed with self preparation. He suggests to improve on your weak areas and monitor the improvement regularly.

One of the key facts about the preparation for CAT by Akhil is that he never went to any regular offline coaching institute to prepare for the exam. However, he suggests to take as many Mocks during your CAT 2017 preparation but emphasizes that without due analysis of Mock, attempting a mock test may not be useful.

Akhil Garg has done B.Tech in Electrical Engineering from IIT Kanpur. He is a fresher and got IIM Ahmedabad without any work experience. Akhil belongs to Ghaziabad (Uttar Pradesh). His father is Senior Manager in THDC Pvt Ltd and mother is a home maker. His interests include playing Table Tennis, watching TV Series and reading novels.

MBAUniverse.com has brought a round of CAT toppers’ success stories for the benefit of CAT 2017 aspirants. In the series we present the success story of confident Akhil Garg who not only scored 99.73 percentile in CAT 2016 but also converted his admission call to IIM Ahmedabad.

Determined to crack CAT with high percentile, Akhil appeared only in CAT exam and did not apply to any other B-school apart from IIMs. With his right preparation strategy and well devised plan, he scored 99.73 percentile.

Sharing with MBAUniverse.com Akhil highlights his experience in preparation journey to CAT and modestly attempts to give the ‘success mantra’ to the CAT 2017 aspirants

MBAUniverse.com: How did you prepare for each section QA, VARC & DILR? What study materials and books did you use?
Akhil (CAT topper): VARC and LRDI section in CAT do not require any specific theoretical understanding, and having a mathematics background I was fairly familiar with the concepts needed for Quant Section. However, I did do some separate preparation for VARC and DI. I wrote down whatever new words I encountered after reading at least 5-6 newspaper articles every day and for DI, I practiced approximation techniques for quick calculations.

MBAUniverse.com: Was there any particular section that you were weak at? How did you overcome this challenge?
Akhil (CAT topper): I was relatively weak at VARC. Hence, I focused a lot on reading different articles and novels, conversing in English with friends and even watching English TV series and movies.

MBAUniverse.com: How can candidates use Mock tests better? What is your advice?
Akhil (CAT topper): Mocks are not useful until you thoroughly analyse your performance afterwards, understanding where and why you went wrong so that you know which areas to work upon.  Identify your weak areas, plan your strategies and monitor your improvement through future mocks.

MBAUniverse.com: Other than CAT, which exam did you appear?
Akhil (CAT topper):  I appeared only for CAT examination.

MBAUniverse.com:  Please share your strategy for the CAT Day. What was your last-minute preparation? How did you plan your CAT test taking?
Akhil (CAT topper): For the most part I chilled out the day before CAT examination, just revising some shortcut formulas for Quant section and vocab words for VARC section. Based on mocks, I had planned which questions I would attempt first and how much time I would spend before moving on to next questions.

MBAUniverse.com: Please share your GD/WAT topics & PI questions at different institutes and the ones who offered you admission?
Akhil (CAT topper):

The WAT Topics at IIMs were:

MBAUniverse.com:  Which B-school you decided upon and why?
Akhil (CAT topper): I decided upon IIM Ahmedabad as it has the most practical teaching pedagogy (using case study approach) and is the most reputed B school in the country.