MBAUniverse.com News Desk | :
September 23, 2017
The myth that small town candidates don’t crack CAT with high percentile is broken by Mukesh Goyal who scored 100 percentile in CAT 2016 with self preparation and got into MBA 2017-19 at FMS Delhi. Mukesh comes from a small town Sunam in District Sangrur in Punjab and prepared for CAT without joining any coaching. 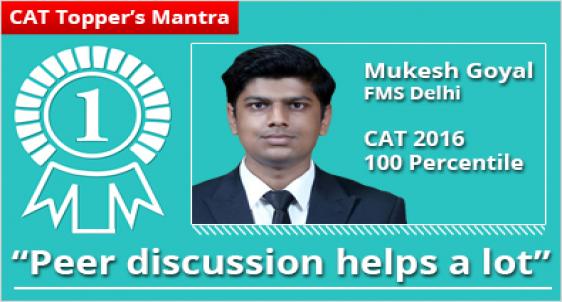 CAT 2017 can be conquered with 100 percentile by the determined students from small towns and with their self preparation, is the message Mukesh Goyal, CAT 2016 topper with 100 percentile and student of MBA 2017-19 batch at FMS Delhi shares with the CAT 2017 aspirants.

Mukesh hails from a modest family of small town Sunam in Sangrur district of Punjab. His father is a businessman and mother is homemaker. Sunam, as the name reflects represents a good reputation and true to the reputation of his birth place, Mukesh has added flying colours to it. Few may be aware that Sunam is also the birthplace of Shaheed Udham Singh, the great martyr who laid his life in Indian independence Movement by avenging of Jalianwala Bagh Massacre where British killed hundreds of innocent Indians.

Mukesh Goyal was a working professional when he started his CAT 2016 preparation. He balanced his CAT preparation with his working hours and managed both. It was not only simple preparation but also a good deal of devotion was required to overcome the weakness in VARC section.

Breaking the myth that Coaching is required to crack CAT exam, Mukesh remained stuck to self preparation but took as many Mocks as possible. An inspiration to CAT 2017 aspirants, Mukesh advises the MBA aspirants to take more and more Mocks, analyse them and have peer discussion which will help in boosting your score in CAT 2017.

Faculty of Management Studies (FMS) of Delhi University is the dream B-school for CAT toppers who prefer the campus to IIMs and other top B-schools due to the various USPs of this highly ranked B-school which has a legacy of more than 60 years. FMS Delhi is the highest RoI B-school with very low fee structure and high placements.

Mukesh has been a consistent performer throughout his academics. He scored 91.2% in class 10; 87.8% marks in class 12 and 72% marks in Bachelor in Engineering (B.E.). Mukesh had worked as Market Analyst at Futures First before joining MBA 2017-19 at FMS Delhi. Mukesh has great interest in playing and watching Cricket & Football doing  Acting among other hobbies.

For the benefit of CAT 2017 aspirants, MBAUniverse.com has brought a round of CAT toppers’ success stories alongwith their success mantra that led them to crack CAT with high percentile. In the series we present the success story and CAT 2017 preparation tips shared by Mukesh Goyal, student of MBA 2017-19 batch at FMS Delhi and CAT 100 percentiler.

MBAUniverse.com:What was your preparation strategy for CAT 2016?
Mukesh Goyal (CAT topper): My strategy was to improve my weak areas and strengthen my strong areas. I focused on mocks as I think through Mocks, one can check his/her preparation level easily and can accordingly improve. Also, I used to have discussion with my friends who were preparing for CAT as well and that helped me a lot in my preparation.

MBAUniverse.com: How did you prepare for each section in CAT exam – VARC, DILR & QA? What study materials and books did you use?
Mukesh Goyal (CAT topper): I prepared for CAT mainly through mocks. I used to write 1-2 mocks per weekend and then analyse those mocks and make changes to my approach accordingly. I used to prepare mainly through mocks, sectional and topic specific tests.

MBAUniverse.com: Was there any particular CAT exam section that you were weak at? How did you overcome this challenge?Mukesh Goyal (CAT topper): I was weak at VA section. I practiced sectional tests and topic specific tests in order to improve this section. I used to focus on analysis part of these tests. I used to solve a lot of RCs and CR questions.

MBAUniverse.com: How can candidates use Mock tests better in CAT 2017 exam? What is your advice?
Mukesh Goyal (CAT topper): One can try different types of strategies in mocks and accordingly see what kind of strategy suits him/her better. All the mock questions – incorrect, correct and un-attempted should be analysed properly. Through proper analysis, one can know about his/her weak and strong areas and can work accordingly. Attempting the easy and doable questions first and leaving the difficult ones for the last is really important and one can learn about this through mocks.

MBAUniverse.com: Did you go to offline coaching centre? What role does a coaching centre play?
Mukesh Goyal (CAT topper): I did not go for any offline coaching. I think apart from providing subject knowledge, coaching might help you in getting in regular touch with studies. It depends on the individual whether he/she needs coaching or not. Students have done well in CAT with coaching as well as without coaching.

MBAUniverse.com:  Which institutes did you apply for admission?
Mukesh Goyal (CAT topper): I applied for IIMs, FMS, XLRI and IIFT .

MBAUniverse.com:  Please share your strategy for the CAT Day. What was your last-minute preparation? How did you plan your CAT test taking?
Mukesh Goyal (CAT topper): For the CAT day, I just had one simple thing in my mind that I need to be calm. I knew that if I would be calm, I would do well as I was well prepared. I had no particular test taking strategy in my mind. I just wanted to see the exam first and then make the strategy accordingly. I did not want to have any preconceived notions and that thing to affect my exam.

MBAUniverse.com: Please share your GD/WAT topics & PI questions at different institutes and the ones who offered you admission?
Mukesh Goyal (CAT topper): GD/WAT topics were mostly related to current affairs especially related to Indian economy. PI questions pretty much covered everything from your technical knowledge to your work experience to your current affairs knowledge. Types of questions vary from institute to institute and panel to panel. So, you need to be prepared for everything under the sun.

MBAUniverse.com:  Which B-school you decided upon and why?
Mukesh Goyal (CAT topper): I joined FMS because it was one of my dream colleges. I talked with my parents, friends, seniors, alums of different B schools before finalising my decision. FMS provides a lot of good opportunities and a smaller batch was also a factor in favour of FMS Delhi.

MBAUniverse.com:  Any message you would like to share with the candidates preparing for CAT 2017.
Mukesh Goyal (CAT topper): Stay focused and stay calm and keep working hard. Give equal importance to each section. Give your best. At the end, you should not feel that you could have done something more. Also, enjoy the preparation journey. Keep in mind that CAT is not be all and end all in life.