MBAUniverse.com News Desk | :
October 10, 2017
Faculty of Management Studies (FMS), Delhi University, Delhi has brought substantial changes in its MBA 2018-20 admission criteria by reducing the weightage to CAT 2017 exam score; reintroducing the Group Discussion (GD) round which was scrapped in 2014; increasing the weightage to PI round 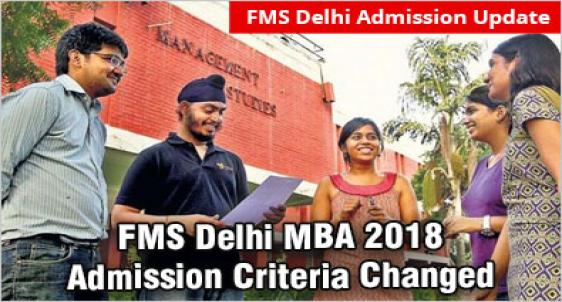 “Admission to MBA programme is based on Extempore Speech, Personal Interview and CAT 2014 score” - FMS Delhi

Announcing the overhaul in its admission process for full time MBA 2018-20 batch, FMS Delhi has stated “From the shortlisted candidates, admission to MBA programme shall be based on Extempore Speech, Group Discussion, Personal Interview, Class X & Class XII marks and CAT 2017 scores as provided by CAT centre.”

CAT 2017 Score loses weight from 85 to 60%
CAT score which used to command 85% weight in final selection round at FMS Delhi has lost its weight by 25 points on a scale of 100. Now, the CAT 2017 score will carry a weight of 60% only to arrive at the final merit list. The score of CAT 2017 will also include the academic profile and other factors which were not taken into account at the time of first stage shortlisting criteria.

GD round reintroduced with 10% weight
Group Discussion (GD) round which was scrapped 3 years back by FMS Delhi as one of the components in its admission process, has been reintroduced and will command a weight of 10%.

The extempore speech is the test of speaking skill. Clarity of thought and logical and coherent speech relevant to the topic is the key to score full marks in extempore. Whether you grasp the core of the topic and can speak without beating about the bush reaffirms your future managerial ability as a team leader

To score maximum in extempore the candidate has to organize the thoughts before speaking and should not go wayward as it will give the impression that you are trying to befool the panelists by passing the time only.

Personal Interview (PI): 15% weight
FMS Delhi has increased the weightage to personal interview from 10% to 15%. The Personal Interview at FMS may last from 7 minutes to 30 minutes depending upon your knowledge, power of expression and way of speaking. On an average the interview round of a candidate consumes around 12 to 20 minutes with 2-3 panelists taking the interview. The PI will have the highest weightage in the final admission round after CAT 2017 scores.

3% Additional weightage to promote gender diversity
An additional 3% of the maximum aggregate marks shall be awarded to the women candidates who appear for the interview for admission to MBA 2018-20 at FMS Delhi while drawing the list of selected candidates.

Delhi: Only centre for PI round
FMS Delhi conducts the Personal Interview round at Delhi only. The candidates from all over the country are supposed to attend the final admission round only at one city-Delhi in accordance to the assigned date and session.

Please note that applicants who have not taken CAT 2017 will not be considered for admission at FMS Delhi. The candidates will be required to produce their original certificates and mark sheets at the time of the interview. The final list of candidates selected will be declared by FMS Delhi after completing the process for all candidates.

FMS Delhi: Weightage in final merit
Following are the weightage components to arrive at the final merit list at FMS Delhi

Faculty of Management Studies (FMS) University of Delhi has opened the admission process to its flagship MBA 2018-20 batch today on October 5. The last date to apply at FMS Delhi is November 20, 2017. The only exam scores acceptable to FMS Delhi are of CAT 2017. Candidates seeking admission to MBA 2018-20 at FMS Delhi need to apply online.