MBAUniverse.com News Desk | :
October 14, 2017
IIM Ahmedabad student of PGP 2017-19, Gyayak Jain scored 100 percentile in CAT despite the fact he was a working professional and had to keep a balance between work and CAT preparation. Gyayak preferred self preparation instead of joining some coaching 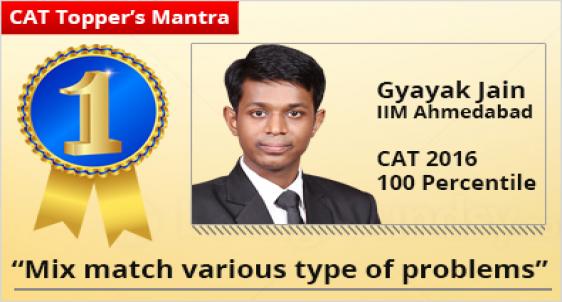 “I get fatigued if I do same kind of problems together in one go, so I mix-matched various types of questions” Gyayak Jain CAT topper with 100 percentile and IIM Ahmedabad student

An inspiration to CAT 2017 aspirants, IIM Ahmedabad student of PGP 2017-19, Gyayak Jain scored 100 percentile in CAT despite the fact he was a working professional and had to keep a balance between work and CAT preparation.

Gyayak preferred self preparation instead of joining some coaching although he made it a point to attempt as many mocks before the CAT exam as possible. More importantly, Gyayak analysed each and every mock and developed his own logic to solve the problems.

One of the key strategies he adopted was that he moved on to next problem, if he was not satisfied with the tailor-made solution which did not conform to his logic.

Gyayak Jain is from Indore and has done B.Tech in Mechanical Engineering from IIT Delhi  in 2016. Before joining IIM Ahmedabad, he was working for 7 months with Deloitte. Photography and reading comics are his hobbies.

Sharing his experience how he prepared for CAT exam, Gyayak advises the CAT 2017 aspirants to mix and match variety of problems. Apart from CAT exam, he did not appear in any other MBA entrance test.

MBAUniverse.com has brought a round of CAT toppers’ success stories for the benefit of CAT 2017 aspirants. In the series we present the success story of confident Gyayak Jain who not only scored 100 percentile in CAT 2016 but also converted his admission call to IIM Ahmedabad.

Determined to crack CAT with high percentile, Chanchal appeared only in CAT exam and did not apply to any other B-school apart from IIMs. With her right preparation strategy and well devised plan, she cracked the exam with a high percentile.

Sharing with MBAUniverse.com, Chanchal highlights her experience in preparation journey to CAT and modestly attempts to give the ‘success mantra’ to the CAT 2017 aspirants

MBAUniverse.com: How did you prepare for each section QA, VARC & DILR? What study materials and books did you use?
Gyayak (CAT topper): For VARC, I slowly improved as I took mock tests and tried eliminating issues associated with various sections of it.

For DI/LR, after giving many mock tests, I came out with a section attempting strategy. It was selection of appropriate sets out of 8 sets of questions, in which mostly 4 were DI and 4 of LR. I tried to look through all the sets in one go in starting in first 2-5 minutes and decide on (based on my comfort level of those type of problems) which were my first 2 sets to be attempted, then next 2, and so on. I tried distributing these 2 sets by selecting 1 set from DI and 1 from LR.

For Quant, I used TIME study modules to get me acquainted with various formulas and tricks of solving various types of problems. The practice for it was done in mock tests. Also, I had no guilt in leaving questions which I was uncomfortable with or was unsure about. I did not waste time in re-solving a question more than once if I am not getting any of the options.

MBAUniverse.com: Was there any particular section that you were weak at? How did you overcome this challenge?
Gyayak (CAT topper): I believe I was weak in VARC and therefore I started by looking into model answers given in the solutions and tried to understand if I associated with the logic given in the solution. If I was satisfied with the logic given in the solution, which was not always true, I tried to look problems from that point of view also in the next mock. When I was not convinced with the solution, I ignored the mistake and went ahead with my intuition/logic in next mocks too. If I find that same mistake is repeating, then I tried to find out situations where my logic will not work. I tried experimenting with various exam attempting strategies and realised I get fatigued if I do same kind of problems together in one go, so I mix-matched various types of questions.

MBAUniverse.com: How can candidates use Mock tests better? What is your advice?
Gyayak (CAT topper): Mock are the best place to learn about the areas of improvement as by looking through the solution you realise the types of questions you could have done and type which you have no clue about, so that you can modify your preparation strategy accordingly. Also, one can experiment with various exam attempting strategies and come upon an optimal one, best for oneself. So, I believe that mocks are to be used with most effectiveness as their results have no effect on your life.

MBAUniverse.com: Did you go to offline coaching centre? What role does a coaching centre play?
Gyayak (CAT topper): No, I am therefore unable to answer about the role it can play.

MBAUniverse.com: Other than CAT, which exam did you appear?
Gyayak (CAT topper):  None. I appeared only in CAT 2016

MBAUniverse.com:  Which institutes did you apply for admission?
Gyayak (CAT topper):  I applied for IIM Ahmedabad, Bangalore, Calcutta, Lucknow, Indore

MBAUniverse.com:  Please share your strategy for the CAT Day. What was your last-minute preparation? How did you plan your CAT test taking?
Gyayak (CAT topper): For CAT day, I tried to be relaxed and a day before the exam, I tried to base my confidence by looking at the mock in which my performance was good. According to my experience, a good night sleep is more fruitful then last minute preparations. Also, an important aspect is time keeping, i.e. to come up on your average time taken for a problem and trying to stick to it on the CAT day.

MBAUniverse.com: Please share your GD/WAT topics & PI questions at different institutes and the ones who offered you admission?
Gyayak (CAT topper): Almost all of my interviews, except at IIM Ahmedabad, were based on my mechanical engineering and I was not prepared enough to answer those with confidence. In IIM Calcutta, I was grilled on the fact that I had scored average marks in graduation while I scored 100%ile in CAT. In IIM Bangalore, I was grilled on my writing skills of SOP.

In IIM Ahmedabad, PI was conducted to select the person rather than reject. I was helped by asking supporting questions in questions where I got stuck and they asked me about my hobbies and tested me on its knowledge also. Apart from that only in IIM Ahmedabad, the WAT had no specific instruction to write in paragraphs, so I used this opportunity to write in bullet points and I believe that it impressed the interviewers.

MBAUniverse.com:  Which B-school you decided upon and why?
Gyayak (CAT topper): I decided upon IIM Ahmedabad because I was fortunate to not having dilemma of thinking about options.

MBAUniverse.com:  Any message you would like to share with the candidates preparing for CAT 2017.
Gyayak (CAT topper): CAT is an easy exam if you believe it to be so and be yourself and not panic on exam day. Even if your prospects are not looking good today, they will improve as you improve and consistently force towards achieving the seemingly unachievable.