MBAUniverse.com News Desk | :
January 11, 2018
Offering a relaxation of 10 percentile in shortlisting to achievers in admission 2018-20 batch, IFMR Chennai has reduced the cut offs to 70 percentile in CAT/XAT exams, from earlier 80 percentile. The last date to apply for MBA admission 2018 is January 15 for early decision round and February 5 for General round 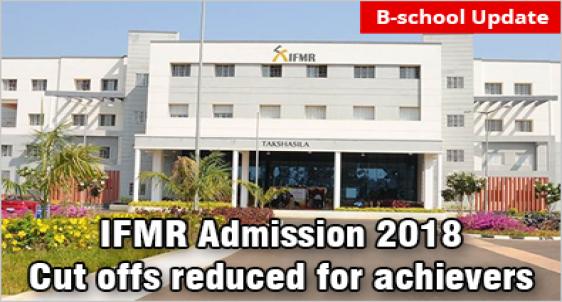 Offering a relaxation of 10 percentile in shortlisting to achievers in admission 2018-20 batch, IFMR Chennai has reduced the cut offs to 70 percentile in CAT/XAT exams, from earlier 80 percentile which is still applicable to non-achievers.

Not only this, with a view to provide opportunity to MBA aspirants to study at its new campus at Sri City near Chennai, IFMR the leading B school in South India has extended the last date to apply for MBA admission 2018 till January 15 for early decision round and February 5 for General round.

Cut offs reduced for achievers
The Admission Committee at IFMR recognizes achievements across many domains of human endeavor, and hence provides relaxation to achievers in the cut off with regard to various entrance exams.  The reduced score cut offs in different exams to shortlist the achievers are:

Recognized Achievers’ areas
Based on Achievements in the below given areas and as listed in the application form, an applicant gets the benefit of provisional relaxation of cut off at the time of shortlisting. The achievements claimed by the applicant, are verified during the selection process, both with regard to documentary evidence and oral articulation of the details of the achievements.

Nearly 40% of applicants in the past years have claimed achievements, but only half of these stand up to scrutiny, and the batch usually contains less than 20% students who have enjoyed relaxation. 80% of the students have qualified on the basis of the cut off without any relaxation.

Now the candidates who were working earlier but are not working currently can apply with Early Decision Round for MBA admission 2018 at IFMR Chennai till January 15.

University MBA instead of PGDM
IFMR has been awarded the status of University and offers MBA degree since the batch of 2017 instead of Post Graduate Diploma.  The step was taken by IFMR as soon as the Union Cabinet cleared the IIM Bill enabling IIMs to award MBA degree.

The selection process at IFMR consists of Written Ability Test (WAT) followed by personal interview (PI). The candidates will have to go through PI-WAT round which has 25% weightage in selection process.

Admission process
Applicants are required to take/have taken any of the following standardised entrance exams – CAT 2017 / XAT 2018 / CMAT 2018 / GMAT & GRE (taken in the last three years). While CAT/XAT/CMAT percentiles or GRE/GMAT scores are an important component of the admission process, these are not the sole criteria for admission.

The admission committee will consider the applicant’s past academic performance, and performance in Personal Interview. Further the admissions committee recognizes the importance of passion for achievement demonstrated even in non-academic endeavour such as sports (represented country, state or district), NCC, Performing Arts (but NOT fine arts), volunteering, activism etc. and at the work place (of a corresponding level). Those with track record in these areas would get a relaxation with regard to cut off scores, provided they are otherwise eligible, and capable.

Candidates with excellent academic profile, achievements, quality work experience will stand fair chances of admission at IFMR even if they score a little low percentile in entrance exam.

Placement at IFMR
IFMR has a consistent record of high placements. IFMR is one of the top B-schools offering quality management education with 100% campus placements and consistently rising average packages over the years. The B-school has recently opened its new campus at Sri city, near Chennai.

Shortlist based on Profile

WAT topic in IFMR
Going by the past trends, the WAT last year had a topic “It is easier to convince the client than to convince the boss”, and the applicant had to write both FOR and AGAINST the topic.

IFMR is included among Good Business Schools category (26-50 ranks) by Business Today-MDRA B School Survey 2015 and enjoys All India Rank 22 by The Hindu Business line- MBAUniverse B School ranking 2017.

Established in 1970 as a not-for-profit society, IFMR was sponsored by ICICI, the House of Kotharis and other major industrial groups. The current Board of Governors, headed by Mr N. Vaghul, Ex. Chairman, ICICI Bank, consists of leaders of major corporations in India as well as respected academicians.

Stay tuned to MBAUniverse.com for more updates on IFMR admission 2018