MBAUniverse.com News Desk | :
February 2, 2018
IIM Act 2017 came into force on Wednesday January 31, 2018 after the IIM Bill 2017 got the assent of President of India Shri Ram Nath Kovind one month ago on December 31, 2017. A few hours before the IIM Act 2017 could make its roll out on January 31, giving the promised autonomy to 20 IIMs, Ministry of HRD used the opportunity to appoint the directors of IIM Ahmedabad and IIM Bodhgaya 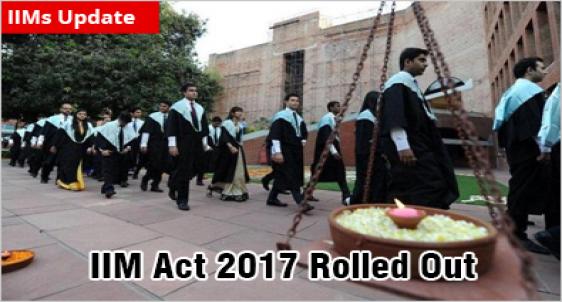 IIM Act 2017 came into force on Wednesday January 31, 2018 after the IIM Bill 2017 got the assent of President of India Shri Ram Nath Kovind one month ago on December 31, 2017. A few hours before the IIM Act 2017 could make its roll out on January 31, giving the promised autonomy to 20 IIMs, Ministry of HRD used the opportunity to appoint the directors of IIM Ahmedabad and IIM Bodhgaya. Moving a step further, IIM Kozhikode also got its Chairman, BoG ahead of IIM Act taking effect, on Wednesday January 31.

A positive key effect of IIM Act 2017 for the students is that all the 20 IIMs are now empowered to award MBA degree to their students instead of PGP/PGDM diplomas which used to hamper prospects of global career opportunities and higher studies of their students as the distinction is made between globally acceptable MBA degree and post graduate diploma.

Appointments made few hours before the Act came into force
The Appointments Committee of Cabinet approved the names of Prof. Errol D’Souza as the new Director of IIM Ahmedabad and AV Vellayan, the Executive Chairperson of the Murugappa Group as the chairman of the Board of Governors at IIM-Kozhikode. MHRD also appointed IIM Raipur’s Professor Vinita Sahay as the first director of IIM Bodhgaya in Bihar on January 29, two days before the IIM Act 2017 took effect.

Even after the appointment of directors of two IIMs, IIM Jammu, IIM Kozhikode, IIM Amritsar are operating without their full time directors. The leadership positions will now have to filled up by the Board of Governors (BoGs) of the respective IIM in accordance with the new Act.

No further Appointments by MHRD
These appointments at IIMs would be the last such appointments by the Ministry of HRD, Government of India as the IIM Act 2017 empowers  the board of governors of each IIM to appoint its own chairperson or director, moving away from the earlier procedure of forwarding the suggested names to the Minstry of HRD which could or could not agree with the suggested names or could appoint the person of its choice.

IIM Bill 2017 was passed by Rajya Sabha on December 19, 2017 and by Lok Sabha on February 9, 2017 unanimously after being tabled by the Union HRD Minister Mr Prakash Javadekar. After getting the nod of President of India on December 31, the bill has now become IIM Act 2017 and has taken effect on Wednesday January 31, 2018.

Ten thousand Students of 2016-18 and 2017-19 batch and the students of forthcoming 2018-20 batch of all the 20 IIMs would now be benefitted as they will be awarded MBA degree instead of Post Graduate Diploma in Management (PGDM) or PGPM.

For the last few years, IIM Bill was under consideration and lot of debate & discussion on it in the IIM circles and at the MHRD level had been going on over the various provisions of the bill. With the assent by the President, now IIM Act 2017 has paved the way to fulfil the long cherished dream of IIM passing out students to get MBA from their IIM in 2018 as all the IIMs would be vested with the statutory powers to award MBA degrees.

IIMs’ flagship diploma programmes: Now to be conferred with MBA

IIMs will now award MBA degree instead of diploma to their various management programmes which are:

The top and older IIMs like IIM Ahmedabad, Banagalore, Calcutta, Lucknow among others are already well known world-wide. However, the new IIMs especially the 7 baby IIMs who started operation in 2015-16, are lesser known and sometimes are not able to get admission as per their full intake and also lag behind in placements despite carrying the IIM brand.

The roll out of IIM Act 2017 will not only enable the IIMs to award MBA degree but will also enable them to operate with higher autonomy, seeking international alliances and expanding their role further in global industry connect for their existing and future batches.

Stay tuned to MBAUniverse.com for more updates on IIM Act 2017 and its impact on MBA education