MBAUniverse.com News Desk | :
April 6, 2018
Reintroduction of Group Discussion (GD) round with 10 percent weight in final selection process at FMS Delhi now holds the key to get into the MBA 2018-20 batch at this high RoI MBA college of Delhi University. FMS Delhi has reduced the weightage of other key selection components and has added Group Discussion as one of the key components in final admission process 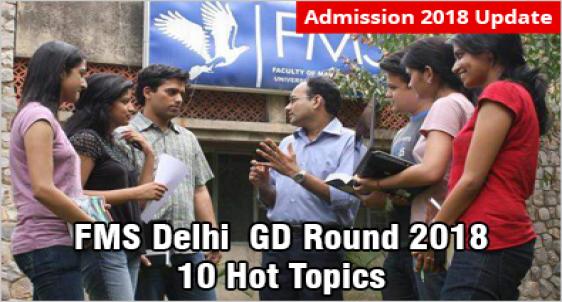 The major chunk of the reduced weightage has been awarded to GD round with 10% weightage in final selection round. If you score full 10% marks in GD round, you can emerge as winner at FMS Delhi

Reintroduction of Group Discussion (GD) round with 10 percent weight in final selection process at FMS Delhi now holds the key to get into the MBA 2018-20 batch at this high RoI MBA college of Delhi University.

FMS Delhi has reduced the weightage of other key selection components and has added Group Discussion as one of the key components in final admission process.

GD round begins on April 16
FMS Delhi has shortlisted 2161 candidates for final selection round of its MBA 2018-20 batch for an intake of 220 students including the supernumerary seats. The GD-PI-Extempore speech round for these candidates will begin on April 16 and will be over on April 23, 2018.

Weight reduced for CAT 2017 score: GD key weightage component
Weightage to CAT 2017 exam score has been reduced to 60% from 85% last year. Now if you score 100 percentile in CAT 2017 you will get a weight of 60 points on a scale of 100 in the overhauled admission criteria of FMS Delhi as against 85 last year.

FMS Delhi Admission 2018: Weightage in final merit
Following are the revised weightage components to arrive at the final merit list at FMS Delhi

10 Top GD topics for FMS Delhi
FMS Delhi which had done away with GD round three years back is fond of placing GD topics mostly on Business and Economy, Current Affairs, Social Issues. Below are shared the expected top GD topics duly solved with pros and cons and key advisory and tips what to include, exclude and how to participate in GD round to maximize your score and get an edge.

Globalization: An Opportunity or a Threat?
After US – China Trade war like situation, this topic has become one of the favourite for GD round at B-schools. Globalization refers to the increasing integration of economies around the world, particularly through trade and financial flows. The term sometimes also refers to the movement of people (labor) and knowledge (technology) across international borders. In addition, there are also broader cultural, political and environmental dimensions of globalization. Read the solved topic in detail

The Fugitive Economic Offenders Bill 2017
Cleared by the Union Cabinet, on March 1, 2018 the Fugitive Economic Offenders Bill 2017 provides for measures to check economic offenders from evading the process of Indian law by remaining outside the jurisdiction of Indian courts and seeks to uphold the rule of law in India.  The topic has become a favourite for GD round. Read the solved GD topic in detail

Social Media: A boon or a bane for society and individuals
Recent misuse of facebook data has made this issue come up in lime light and has made it an important topic of Group Discussion in B-schools. Though social media offers a global platform to share and express but its constant engagement is affecting individual productivity, relationships and society as a whole. Read the solved GD topic in detail

Demonetisation: Success & failures
On November 8, 2016, the Prime Minister of India, Narendra Modi announced the demonetization of all Rs.500 and Rs. 1,000 denomination banknotes of the Mahatma Gandhi Series. The demonetization announcement made the use of Rs.500 and Rs.1000 banknotes invalid past midnight of November 8. The topic has been debated and now has become a key topic in Group Discussion round in B-schools including IIMs, XLRI and others. Read the solved GD topic in detail

Bank Recapitalization: NPA reduction and not bank recapitalization can cure the health of PSBs in India
There are 21 Public Sector Banks which are the state-owned banks in India. Public sector banks account for 70 percent of total banking assets in India. The ‘lack of dynamism’ in banking practices at the bank level and at the Finance Ministry level to control judiciously the flow of finance and recovery system to stop an account from turning into NPA, keeps these Public Sector Banks starved of funds and crying for more capital infusion every now and then. Read the solved GD topic in detail

RERA: Will it restore the trust of home buyers?
The Real Estate (Regulation and Development) Act, 2016 (RERA) came into effect from May 1, 2017. RERA is effective on all the residential and commercial projects in all the states of India. RERA is an Act passed by the Parliament and seeks to protect interests of home-buyer. Read the solved GD topic in detail

IIM Bill 2017: Is it really beneficial for the students?
IIM Bill, now known as IIM Act 2017, seeks to bring many changes in status of IIMs, their autonomy, education system, governing bodies, empowering IIMs to award MBA degree instead of PGDM diploma which they award now. The Act was implemented on January 31, 2018.

For the last few years, IIM Bill was under consideration and lot of debate & discussion on it in the IIM circles and at the MHRD level had been going on over the various provisions of the bill. Read the solved topic in detail

Linking of Aadhaar: Is making Aaadhar mandatory a good idea?
Indian Democratic system is passing through a grave crisis of implementing the Aadhaar Card. It is difficult to present the views without rightly knowing what the Aadhaar is. The Aadhaar in fact is a 12 digit unique identification number that every resident of India (regardless of citizenship) is entitled to get after he furnishes his demographic and biometric information.Read the solved topic in detail

GST: Will economy grow faster with reduced rates of Goods & Services Tax?
GST is one of the hot topics and an MBA aspirant should be able to present the facts on the same along with his/her views coherently. Experts at MBAUniverse.com bring forth key facts on this hot GD topic to help an MBA aspirant to take his/her view point while speaking in the GD round of a top MBA college. Read the solved GD topic in detail

Browsing more GD topics will help
It is a good idea to go through more and more trending GD topics and prepare yourself what and how to present. Latest Group Discussion Topics 2018 in MBA admission can be based on Current affairs, fact based, Social, Economy, or can be an abstract Group Discussion Topic. Category-wise classification of top 100 GD topics in MBA/PGDM admission 2018 at FMS Delhi, XLRI Jamshedpur, IIM Shillong, IIM Kozhikode, MDI Gurgaon and other top MBA colleges would be covering the major areas of GD topics. Read all about the GD round and top 100 GD topics

MBA admission 2018-20 at Faculty of Management Studies (FMS), Delhi University, Delhi will be a different experience for the CAT 2017 toppers with 98 and above percentile as they may not find a place in shortlist despite scoring high in the exam as the high RoI FMS Delhi has announced major changes in its MBA 2018-20 admission criteria.

FMS Delhi admission procedure which was on uniform process for the last few years has been substantially changed for the MBA 2018-20 admission criteria. Announcing the overhaul in its admission criteria for full time MBA 2018-20 batch, FMS Delhi says “From the shortlisted candidates, admission to MBA programme shall be based on Extempore Speech, Group Discussion, Personal Interview, Class X & Class XII marks and CAT 2017 scores as provided by CAT centre.”

Important changes in FMS admission 2018 are: