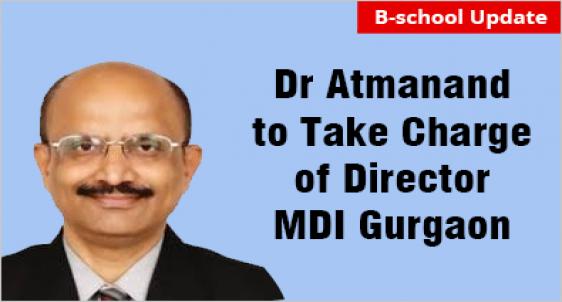 “Pleased to inform you that I will hold additional charge of MDI Gurgaon as Director with effect from 4th October 2018” Dr Atmanand, Director MDI Murshidabad

Confirming the news on Social Media Dr Atmanand has posted, “Pleased to inform you that I will hold additional charge of MDI Gurgaon as Director with effect from 4th October 2018. This is in addition to my present job as Director of MDI Murshidabad.”

The founder dean of MDI Murshidabad, Prof. Atmanand has been associated with MDI Gurgaon for last 20 years. He is also serving as Independent Director on the Board of Central Bank of India. Earlier he worked as the independent Director on the Board of Steel Authority of India Ltd.(SAIL). He has held various responsibilities including Member of the State Finance Commission¸ Government of Bihar and with the Planning Commission, Government of India. Dr. Atmanand is a great leader, deep researcher, professor and writer. He has authored 16 books and published more than 90 research papers in refereed national and international journals. He was the PhD examiner and guided around 30 thesis and dissertation work. A senior Professor of Economics, he specializes in Public Enterprise Management, Management of Energy and Environment, Power, Oil and Gas, Steel, Financing Infrastructure Projects, Project Finance, Economic and Business Environment, Public Policy and Management

It was only seven months back in the month of February 2018, when the permanent Director of MDI Gurgaon Dr Himadri Das took charge. Since Dr Das is expected to remain at MDI Gurgaon till October 3 and will then join IMI New Delhi, Dr Atmanand would be taking the charge of Director, MDI Gurgaon on October 4, 2018. Dr Das had served as the Director of Great Lakes Institute of Management, Gurgaon for five years before taking charge as Director MDI Gurgaon from its Acting Director Prof C. P. Shrimali. Prior to that Dr Das was at the International Management Institute, New Delhi for eleven years in various leadership roles.

Formed as an autonomous body in the year 1973, MDI Gurgaon is one of the highly Ranked B-schools in India. It is the first Indian Business School and second in Asia to get international accreditation for its courses from ‘Association of MBAs’ (AMBA), UK. MDI Gurgaon is also South Asian Quality Systems (SAQS) Accredited by AMDISA in 2005. Various surveys have consistently ranked MDI amongst the top B-Schools of the country. The PG Programmes in Management offered by MDI are recognized by the All India Council for Technical Education (AICTE) New Delhi. Its PGPM has been awarded A Grade by the National Board of Accredited All India Council for Technical Education.

Stay tuned to MBAUniverse.com for more updates on MDI Gurgaon.