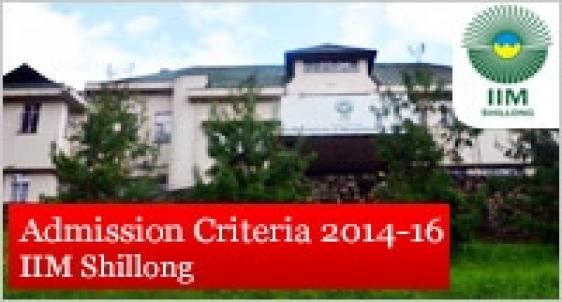 With an aim to help CAT 2013 aspirants to choose the desired Indian Institute of Management, MBAUniverse.com has started a special series - “IIMs Admission Criteria 2014-16” that will equip aspirants with detailed and updated information on the admissions process of all 13 IIMs.

In today’s article of this special series, we will analyze IIM Shillong admission criteria for the Batch 2014-16.

The following articles will also share with you the admissions, faculty & placement Data of IIM Shillong for the year 2013-15.

Located at an altitude of 1,496 meter above sea level and with a population of approximately 2, 60,000 people, Shillong is the capital of one the smallest states, Meghalaya. Shillong has a well-appointed modern town facility with excellent power-supply & state-of-the-art telecommunication network.

IIM Shillong has been set up with a vision of expansion and mobilisation of facilities for offering good quality management education and research in the North Eastern region of India.

Prof Amitabha De has taken over charge as The Director, Rajiv Gandhi Indian Institute of Management Shillong with effect from 17 June 2013.

IIM Shillong is ranked as No: 24 in MBAUniverse.com B School Ranking 2013-14. Below is the performance of IIM Shillong on some of the specific criterion – No: of application received in 2013, Number of permanent faculty, total seats, median domestic salary and fees for 2013.

According to the MBAUniverse.com survey data, IIM Shillong has a total number of 120 seats. The number of permanent and faculty at IIM Shillong is 17 and 15respectively. Fees for 2013-15 batch was Rs. 10.5 lakhs while average placement 2013 was Rs. 11.13 lakhs

The selection of candidates for admission to PGP (2014-16) batch at IIM Shillong will be undertaken in two phases after CAT 2013. The first phase would include declaration of shortlisted candidates for Personal Interview (PI) and the second phase will involve the preparation of a final merit list, on which, the candidates will be offered admission to the PGP (2014-16) batch. The process in each of these phases will be as follows:

A. The minimum requirements to be considered for short listing of candidates would be as follows:

Based on the performance specifications as given in Table 1, a number of candidates who would be considered for short-listing will be obtained.

B. All candidates opted (as per the CAT application) for IIM Shillong PGP 2014-16 batch will first be segregated according to their graduation discipline as reported in CAT 2013 data.

C. The candidates resulted through Section A in respective category will be segregated into various sub-groups based on their discipline status in bachelor’s degree as reported in CAT data.

D. The candidates in various sub-groups would be ranked in the decreasing order of their CAT overall percentile.

X = Number of candidates to be called for personal interview (PI)

However, there will be different cutoff scores for candidate’s performance obtained in PI in various categories as shown in Table 2 below to prepare a list of candidates eligible for preparation of merit list for admission offer.

Table 5: Cut-off on the Performances of Candidates in PI for Preparation of Merit list for Admission Offer

Stay tuned to MBAUniverse.com for more analytical features on Top B schools and their admission process