MBAUniverse.com News Desk | :
December 21, 2013
This article will share with you a comparative analysis of the Final Selection criteria of the top 7 older IIMs. 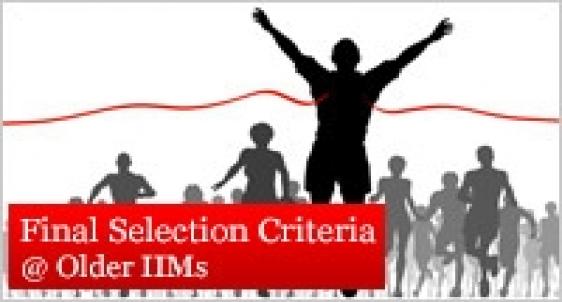 The final selection is primarily based on the performance WAT, GD and PI rounds

MBAUniverse.com has already started a series under the theme “IIM Admission criteria 2014” to help MBA aspirants know about the selection criteria of individual IIMs. We have discussed the admission policies of the top 7 IIMs – Ahmedabad,   Bangalore, Calcutta, Lucknow, Kozhikode, Indore and Shillong.
Our last article gave you a comparative analysis of the Stage 1 i.e. Short listing criteria of all the seven older IIMs.

The admission process is conducted in two stages. In the first stage, candidates are shortlisted on the basis of their CAT 2013 scores or the past academic records. The next stage is that of the final selection, which takes place through the performance in the WAT, PI or GD and other factors like past academic performances and work experience.

The final selection takes place through the following rounds:

Table 1: Weightages of Factors used in Final selection stage of IIMs for Admission 2014

Written Ability Test (WAT) and Personal Interview (PI) have gained importance in the admission process of IIMs. All the 7 IIMs use PI while WAT is also used by all the older IIMs except IIM Shillong.

However, Group Discussion is slowly losing its charm and only two IIMs out of the seven have included Group Discussion as one of the parameters of evaluation for admission 2014. IIM Lucknow and IIM Kozhikode give 10% and 7.5% weightage to GD round.

Out of the seven older IIMs, only IIM Indore gives 50% weightage to past academic records which is based on the marks of class 10th, 12th and graduation.

The interviewers will also evaluate the quality and relevance of the candidate’s work experience. The scores of pre- and post-personal interview rounds would be cumulatively calculated in the second and the final phase of selection to select the candidates for final admission. IIM Bangalore Admission criteria 2014-16

The final admission offer list is generated on the following basis:

The Grand Total (C) will be used to rank the candidates according to their merit. IIM Lucknow Admission Criteria 2014-16