MBAUniverse.com News Desk | :
February 28, 2014
Indian Institute of Foreign Trade, Delhi and Kolkata campuses have concluded their final placements for the Batch of 2012-2014 in record time with a 15% rise in average salary than last year. 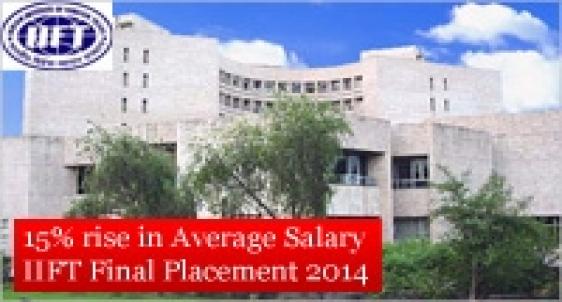 Indian Institute of Foreign Trade, Delhi and Kolkata campuses have reinforced their standing as one of the elite B‐Schools of the country, by concluding final placements for the Batch of 2012-2014 in record time. In all 85 recruiters including 46 first-time recruiters made offers for 200 students of the graduating class of 2014. The highest domestic CTC stood at Rs. 24 lakhs p.a. with the average CTC rising by 15%to Rs. 14.32 lakhs p.a.

Dr. Surajit Mitra, Director of IIFT quoted: “Once again the leaders of trade and industry from India and abroad have re-confirmed their faith in the quality of students IIFT has produced. Leading enterprises cutting across major sectors of our economy have recruited our students. Thanks to our curriculum revision keeping in mind the need of the market. It has paid off.”

The recruiters reaffirmed their faith in IIFT’s talent by rolling out 32 Pre Placement Offers.

International placements saw a remarkable rise with 12 offers being offered for roles in Africa, the Middle – East, Indonesia, Singapore and Malaysia. The highest international offer stood at US$ 88,500 with 3 out of the famed ‘ABCD’ of global trading – namely Bunge, Cargill and Louis Dreyfus offering multiple roles in trading. Other prominent recruiters in trade include the likes of Tricon Energy, Triton Group, Trimex International, Phoenix Commodities and Valency International.

IIFT was set up by the Government of India as an autonomous organization to help professionalize the country's foreign trade management and increase exports by developing human resources; generating, analyzing and disseminating data; and conducting research. IIFT has a portfolio of diverse long-term programmes, catering to the requirements of aspiring International Business executives and mid-career professionals alike.

Our earlier articles on IIFT

To score high marks in GD PI WAT process of B schools for Admission 2014, Click here

WAT Topic for MBA: 2014 General elections will be a watershed for Indian democracy

WAT Topic for MBA: Corruption is the root cause of current economic and social woes in India

WAT Topic for MBA: India`s 1.2 billion population is an asset for the country

WAT Topic for MBA: Indo-US relations; how much beneficial for India

WAT Topic for MBA: FDI in multi brand retail is a boon or bane

MBAUniverse.com offers a comprehensive preparation package for CAT 2014 coupled with over 200 online interactive classes with Top CAT experts including from IIMs for CAT 2014 preparation. Visit the link below for more information and new batch schedules for CAT 2014 exam:

For any doubts and queries related to the exam pattern, preparations and other related queries about MBA entrance exams like XAT,IIFT, NMAT, SNAP, CMAT, IBSAT, MICAT and MBA Admission 2014, click here http://www.mbauniverse.com/mbau_faq/client.php

Stay tuned to MBAUniverse.com or more news and updates on IIFT Delhi and IIFT Kolkata