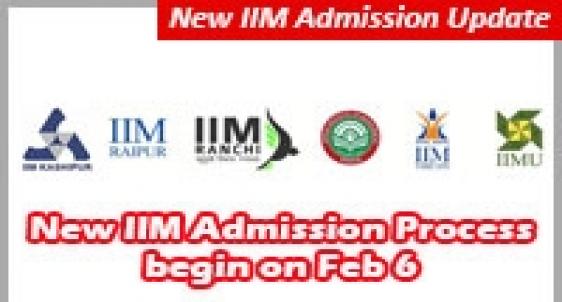 Six new IIMs namely IIM Kashipur, Raipur, Ranchi, Rohtak, Trichy and Udaipur have announced their first stage shortlist of candidates for WAT & PI round 2015. Candidates who have been shortlisted would be informed of their WAT and PI venue , date & time by January 31, 2015. The status of the shortlist is available on the Common Admission site of the new IIMs.

There will be a Common Admission Process(CAP) 2015 for the new IIMs. The six new IIMs at Kashipur, Ranchi, Raipur, Rohtak, Trichy, and Udaipur, are conducting the Common Personal Interview and Written Analysis Test (PI & WAT) Process for their Post-Graduate Programmes in Management for the 2015-17 Batch. The CAP process, going to be coordinated by IIM Udaipur, will commence on February 16, 2015 and will close on March 3, 2015 as stated by IIM Udaipur

The shortlist for CAP round 2015 is based on CAT 2014 performance and each of the six new IIMs has individually prepared shortlists based on their respective criteria. The CAP 2015 coordinating IIM, the IIM Udaipur has thereafter prepared the combined shortlist of candidates to be considered for further processing.

Shortlist of participating Older IIMs to be set aside

From the combined shortlist, candidates who are also called for interviews by IIM Bangalore, IIM Calcutta, IIM Lucknow, and IIM Kozhikode ("older IIMs") will be set aside. The remaining candidates will be called for a Personal Interview & Written Analysis Test ("PI & WAT"). The PI & WAT will be common for the six new IIMs.

The Personal Interview and Written Analysis Test would be conducted at New Delhi, Mumbai, Bengaluru, Chennai and Kolkata.

In a few days and latest by Jan 31, 2015 the shortlisted candidates will be intimated about the date and venue to appear for CAP 2015 round. According to Prof S K Agarwal Verbal Ability Expert and mentor on CAT preparation, all the shortlisted candidates are supposed to focus and prepare well to improve their writing and communication skill. PI & WAT round has even more weightage than CAT 2014 scores.

IIM Admission 2014: Chance for 85 percentilers to get into an IIM