MBAUniverse.com News Desk | :
February 7, 2015
For all the 6 new IIMs, IIM Udaipur has announced the dates and venue for CAP after declaring the shortlist of candidates. 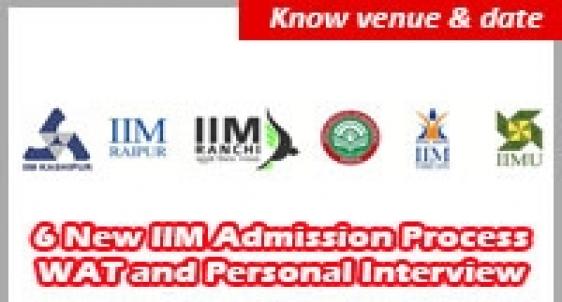 In such cases where the change requests are accepted by CAP coordinating IIMU, communication of change in the centre, date and/or time would be sent by e-mail to the relevant candidates by February 7, 2015

Coordinating the Common Admission Process (CAP) for the final stage of PGP admission 2015 for all the 6 new IIMs, IIM Udaipur has announced the dates and venue for CAP after declaring the shortlist of candidates. The request for change of the date and venue was considered till Feb 5, 2015 and now no further request for any change whatsoever desired will be accepted.

All the 6 new IIMs have separately declared the shortlist of candidates according to their respective shortlisting criteria for final admission round 2015 named as Common Admission process (CAP) 2015. The CAP for admission to PGDM 2015-17 batch to six new IIMs Kashipur, Raipur, Ranchi, Rohtak, Trichy, Udaipur is be coordinated by IIM Udaipur.

Common Admission Process (CAP) for admission to 6 new IIMs would begin on Feb 16, 2015.

CAP 2015 conducted by IIM Udaipur will consist of  Personal Interview PI) and Written Analysis Test (WAT) and would be conducted at New Delhi, Mumbai, Bengaluru, Chennai and Kolkata.

Check your CAP date and Venue

According to IIM Udaipur ‘A candidate may also request a change in the Centre and Date, subject to availability of slot, on or before February 5, 2015 by sending a mail. It is not necessary that the CAP coordinating IIM Udaipur would have accepted all such requests. Candidates who have sought for changes in the centre, date and/ or time of the Written Analysis Test and Personal Interview (WAT & PI) are supposed to provide sufficient justification in their requests.

Although the reasons for seeking such changes will be considered while taking a decision on allotting changed centres, date and/ or time, it will depend also on availability of slots. No request for change would be accepted after February 5, 2015.

Feb 7: Last date to get information

Candidates should therefore make arrangements for attending the WAT & PI as per the schedule already communicated to them and not assume that their change requests would be accepted, if they do not receive any mail from CAP 2015 coordinating IIM Udaipur till Feb 7, 2015.

Since January 19, 2015, various e-mail communications have been sent by IIM Udaipur to candidates who have been shortlisted by the 6 IIMs for further consideration for admission. This communication includes details of venue, date and time for the Written Analysis Test and Personal Interview (WAT&PI).

A communication of revision of schedule has also been sent for some of the shortlisted candidates.

Check the Spam as well

Number of shortlisted candidates for CAP 2015

10 times candidates of the proposed intake are shortlisted for Common Admission Process (CAP) 2015 comprising WAT & PI for admission to 6 new IIMs. With the increase in intake, about 10000 candidates meeting the cut-off criteria in CAT 2014 scores in respective categories appear to have been considered in shortlisting.

With the older IIMs (Ahmedabad, Bangalore, Calcutta, Indore, Kozhikode, and Luck now) sharing their WAT& PI scores with the six new IIMs, the common candidates who have applied to new IIMs, wouldn’t need to appear for WAT& PI process separately, else they have to appear.

Do not miss the chance to enter IIM; CAT 2014 offers more chances this year