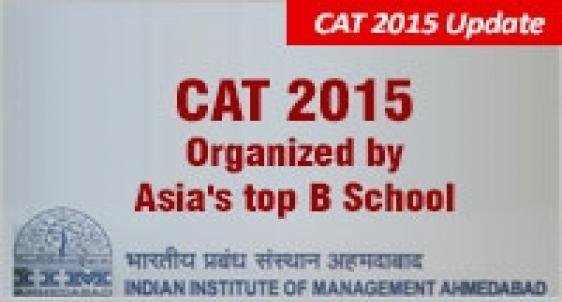 With TCS fully geared up and IIM Ahmedabad at the helm of affairs, CAT 2015 is expected to be conducted earlier than CAT 2014

More glory shall be added to CAT 2015, the prestigious management entrance exam for the admission year 2016-17 as Asia’s No.1 B School, IIM Ahmedabad will be conducting CAT 2015. The most sought after largest MBA/PGDM entrance exam CAT 2015 is going to be conducted in October/November 2015. The expectations to see yet more changes and innovations in CAT 2015 than they were brought during CAT 2014 are riding high. It is expected that more surprises and changes in its process of registration, selection of test centre, conduct of test, duration of test, pattern of test, declaration of result would be brought about by IIM Ahmedabad in CAT 2015.

Common Admission Test (CAT) 2015 will be a pre requisite to admission in IIMs and other top rated B schools for admission session 2016-17. The registration process for CAT 2015 is proposed to open in the month of July/August 2015 and the exam is supposed to be conducted in the months of October/November 2015.  CAT 2015 wouldn’t offer any facility of Off- line voucher purchase and all the registration activity will have to completed on-line only.

MBAUniverse.com has always been updating the CAT aspirants about the changes and surprises in CAT 2014. Now with the change of guard in CAT 2015 conducting IIM from IIM Indore to IIM Ahmedabad, CAT 2015 aspirants should expect yet more changes

With TCS fully geared up and IIM Ahmedabad at the helm of affairs, CAT 2015 is expected to be conducted earlier than CAT 2014. CAT had the history of being conducted prominently in the month of October every year till 2013, in 2014 it got delayed by one month and was conducted in the month of November 2014. This year CAT 2015 is again expected in October 2015.

1 day CAT instead of 2 days

It is very much expected that in order to further strengthen the process of conducting CAT, IIM Ahmedabad and TCS might conduct CAT 2015 in a single day by increasing the number of test centres managing them more efficiently. This would not only accelerate the collation of CAT 2015 data but also would smoothen the process of score normalization.

In case IIM Ahmedabad decides to hold CAT 2015 in a single day testing window, more number of testing cities and test centres would be required to conduct CAT 2015 to accommodate around 2 lakh test takers.

CAT 2014 was held in 99 cities at 354 testing sites as against 40 testing cities with 76 testing sites in CAT 2013. Higher number of centres and cities shall have to be planned to cope with the high number of CAT 2015 aspirants if CAT 2015 is scheduled to be held in a single day test window.

No Off-line vouchers purchase in CAT 2015

IIM Ahmedabad wouldn’t allow the facility of purchasing the off-line vouchers for CAT 2015. All the CAT 2015 aspirants shall have to register themselves on line by paying requisite registration fee on-line only.

With IIM Ahmedabad in command, CAT 2015 aspirants might expect a bit higher Level of Difficulty in the exam. While the number of questions and time allotted is expected to remain the same as of CAT 2014, the difficulty level might go up. CAT 2015 aspirants would need good preparation strategy and planning for CAT 2015.