MBAUniverse.com News Desk | :
March 9, 2015
With the mentoring by IIM Ahmedabad it is expected that IIM Nagpur would become one of the top rated B schools in the country 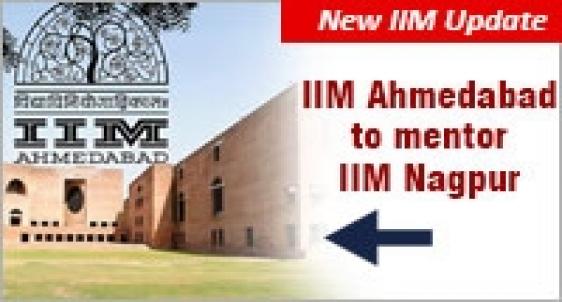 The pedagogy, case study pattern, project work and all other ingredients of academics for which IIM Ahmedabad is known, will impart a better learning environment at IIM Nagpur

Among the 6 proposed new IIMs, IIM Nagpur is the first IIM which is known by its city and not by the state in which it is going to be established. The mentoring task of giving the shape to IIM Nagpur has been assigned to IIM Ahmedabad by Ministry of HRD, Government of India.  With the mentoring by IIM Ahmedabad it is expected that IIM Nagpur would become one of the top rated B schools in the country. Candidates who have scored 90 to 95 percentile in CAT 2014 can explore the admission opportunity in IIM Nagpur for the academic session commencing 2015.

While other 5 proposed IIMs namely IIM Bihar, IIM Odisha, IIM Andhra Pradesh, IIM Himachal and Punjab are still known by their states, IIM Nagpur has got the identity of its city after winning a long battle of making choice among Pune, Aurangabad, Mumbai and Nagpur.

With IIM Ahmedabad at the helm of affairs students seeking admission opportunity in IIM Nagpur can be assured of a very good learning experience at proposed IIM Nagpur which will begin functioning from the academic session 2015-16. Those who appeared in CAT 2014 and have scored a high percentile can hope for their admission in the maiden academic session at IIM Nagpur.

IIM A to provide faculty to IIM Nagpur

In the initial years, the mentor IIM Ahmedabad is supposed to provide all its expertise through its well experienced and highly qualified faculty making it a great learning experience to the students of IIM Nagpur.

Number of students who are going through the Common Admission Process for already existing 6 new IIMs, if offered the opportunity of studying at IIM Nagpur, shouldn’t miss the chance of getting trained for Management programme for next 2 years by the top rated faculty of top rated IIM Ahmedabad.

IIM Ahmedabad the mentoring IIM for IIM Nagpur is supposed to give shape to the admission criteria for the PGPM batch 2015-17 to IIM Nagpur. IIM Ahmedabad  is going through the process of final admission round and in all probability will either select the candidates for IIM Nagpur or will shortlist the candidates out of the CAP 2015 being coordinated by IIM Udaipur, so that the session could begin on time in 2015.

It is expected that there would an intake of 60 students in the first session of flagship PGDM 2015-17 batch at IIM Nagpur.

IIM Nagpur: Components for PI round

The common admission process (CAP) 2015 for admission to new IIMs is being coordinated by IIM Udaipur. The process has started and consists of Written Ability Test (WAT) and Personal Interview (PI). There is no Group Discussion (GD) round. On the same pattern candidates are supposed to go through the admission process comprising WAT & PI for IIM Nagpur.

Out of the candidates already shortlisted and passing through the PI round,  a few in accordance with their merit position, may be offered admission to IIM Nagpur, if they exercise such option.

Since HRD Ministry is prepared to commence academic activities of IIM Nagpur from the forthcoming academic session in 2015, the admission process for the IIM Nagpur is supposed to be concluded soon by the mentor IIM Ahmedabad.

200 acres of land has been allotted in project area of MIHAN (Multi-modal International Cargo Hub and Airport at Nagpur) for setting up the IIM. Given the fact that the Chief Minister of Maharashtra Mr Devendra Fadnavis is personally looking after the project, IIM Nagpur is expected to have world class state of the art infrastructure when completed.

In the meantime for the first few academic sessions, IIM Nagpur is likely to start functioning at Visveswaraya National Institute of Technology (VNIT) from July 2015.

Number of educationists and IIM Ahmedabad alumni have welcomed the decision to set up IIM at Nagpur. According to them in an era of e-learning and globalization of management education the location of the institute does not matter.  While the Cities like Pune and Mumbai have a number of top rated B schools like Symbiosis, PUMBA, SPJIMR, NMIMS, JBIMS, IIM in Nagpur would prove to be great choice and will be a key growth factor of Nagpur.

Nagpur is well connected by air, rail and road. The distance to Nagpur is less than any other city of Maharashtra like Pune from UP, Bihar, Chhattishgarh and Orissa.

There is no good management institute between IIM Indore, ISB Hyderabad and IIM Raipur. IIM Nagpur will cater to fill the gap areas in spreading quality management education.

Stay tuned to MBAUniverse.com for more updates on IIM Nagpur