MBAUniverse.com News Desk | :
March 18, 2015
The commencement of post Graduate programmes from the academic session 2015-16 for 6 proposed IIMs appears all set to begin in July 2015. 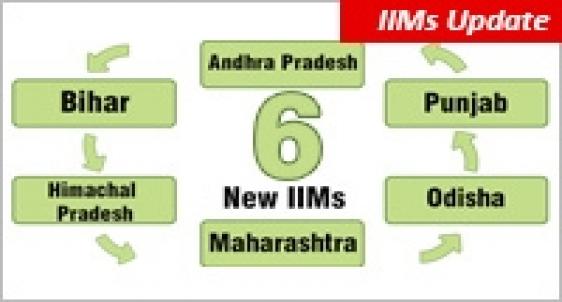 With the fog on future of 6 proposed new IIMs in the states of Andhra Pradesh, Bihar, Himachal Pradesh, Maharashtra, Odisha and Punjab gradually getting cleared, the commencement of post Graduate programmes from the academic session 2015-16 for 6 proposed IIMs appears all set to begin in July 2015.

The proposal to conduct and conclude the admission process for these IIMs is in final stage. The coordinating IIM to conduct Common Admission Process (CAP) 2015,  IIM Udaipur is proposed to have additional responsibility to finalise the admissions for 300+ seats in the 6 proposed new IIMs.  IIM Udaipur is the CAP 2015 coordinating IIM for admission to IIM Kashipur, Raipur, Ranchi, Rohtak, Trichy and Udaipur. Now it will coordinate CAP for 12 IIMs including the 6 proposed new ones announced.

Students of batch 2015-17 getting admission in 6 proposed new IIMs may have the opportunity of getting taught with the fresher batch at the mentor IIM in case any of them doesn’t get accommodated at some good academic building immediately.

It could prove to be a rare opportunity for CAT 2014 takers who despite scoring less would be taught alongwith the students of IIM Ahmedabad, Bangalore, Calcutta, Lucknow, Indore and Kozhikode at least in the first semester of the academic session 2015-16. It has been made clear that out of these proposed 6 new IIMs, if any of them doesn’t get accommodated to commence its operations from the session 2015-16 at some building with good infrastructure suitable to run the IIM flagship batch, the classes for the flagship PGP programme 2015-17 might be conducted at the campus of mentor IIM.

Out of 6 the 3 allocated temporary campus

While the academic buildings for 6 proposed new IIMs have not been decided, the students of PGP batch 2015-17 of following 3 IIMs can have a sigh of relief as the decision on temporary campus to commence classes of the first batch has been taken

For the first few academic sessions, IIM Nagpur is to function from the campus of Visveswaraya National Institute of Technology (VNIT) from July 2015. The mentor IIM is IIM Ahmedabad

200 acres of land has been allotted in project area of MIHAN (Multi-modal International Cargo Hub and Airport at Nagpur) for setting up the IIM Nagpur in the state of Maharashtra. Chief Minister of Maharashtra Mr Devendra Fadnavis is personally looking after the project.

IIM Visakhapatnam in Andhra Pradesh would conduct the classes for the batch 2015-17 at temporary premises on the Andhra University campus. Foundation stone for the permanent campus measuring around 300 acres has already been laid by Union HRD Minister Smriti Irani at Gambheeram village on the outskirts of Visakhapatnam in Andhra Pradesh. The mentor IIM is IIM Bangalore

No academic building allotted for other 3 IIMs

A site selection Central committee, headed by an official of the Ministry of Human Resource Development (HRD), is reported to have visited Sirmaur to finalise the site. Officials in Himachal Pradesh have selected various sites in Paonta Sahib after considering various factors for housing the institute.

In case timely decision is not taken students might be asked to temporarily attend their classes at the campus of IIM Lucknow.

It has not yet been decided at which location the new IIM Punjab campus would come up although decision to establish the IIM at Amritsar has been taken. The new IIM Amritsar in Punjab would come up at 200 acres of land. The permanent campus is expected to be about 35 Kms away from Amritsar.

No decision to commence the classes of IIM Amritsar has finally been arrived at. In case it is not decided in a month or so, the students of IIM Amritsar might have to make the longest journey from North to South to attend the classes at the campus of the mentor IIM Kozhikode in Kerala.

No campus for IIM Odisha has so far been finalized. While the Central committee has reportedly recommended 79 acres of land at Gothapatna on the outskirts of Bhubaneswar for permanent campus of the Indian Institute of Management (IIM) in its report to the Union HRD Ministry, the Chief Minister of Odisha Mr Navin Patnaik  prefers the IIM to be located at Sambalpur which doesn’t have an airport nearby a preferred requirement to set up an IIM.

In case the decision is not taken in time, the classes for the students of IIM Odisha may be conducted in the campus of mentor IIM Calcutta.
.
The stage of indecision may adversely affect the prospective students who have scored the desired percentile and now wish to pursue MBA from one of the IIMs the very existence of whom is still not known.

300+ to be offered admission in proposed IIMs

In the beginning an IIM might go for an intake of 50-60 candidates but the decision on intake is not yet out. It is expected at least 50 candidates will be offered admission to each of the 6 IIMs, making it a total of 300 entrants.

With the mentors of the six new IIMs having been finalised, Government says it is prepared to commence academic activities of these IIMs from the coming academic session. IIM Udaipur is expected to finalize the admission for these 6 proposed new IIMs on the basis of Written Ability test (WAT) and  Personal Interview (PI) round, the major components of Common Admission Process (CAP) 2015.

According to Prof Rishikesha T Krishnan, Director IIM Indore, the CAT 2014 conducting IIM a proposal has been put forth in this regard. Few mentor IIMs have proposed to commence academic activities from their campuses to promote the proposed IIMs.