MBAUniverse.com News Desk | :
May 21, 2015
In its meeting convened on May 20, 2015 to discuss the implications of IIM Bill 2015, EPSI has decided to demand from Ministry of HRD the level playing field for PGDM B schools with IIMs 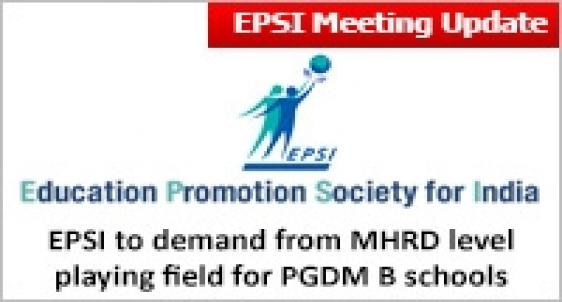 `All out efforts will be made during the next one month to convince MHRD about granting degree conferring power to PGDM institutions` Dr H Chaturvedi, Alt President, EPSI and Director, BIMTECH

In its meeting attended by Chairpersons and Directors of PGDM institutions convened on May 20, 2015, in New Delhi to discuss the implications of IIM Bill 2015, EPSI has decided to demand from Ministry of HRD the level playing field for PGDM B schools with IIMs.

After two hours long deliberations, it was resolved that under the aegis of the EPSI, PGDM institutions will demand to MHRD for providing ‘level playing field’ with IIMs in wake of the IIM Bill, 2015 proposed by the MHRD.

Directors, deans and chairmen of PGDM institutions have expressed their apprehension that after passing of the IIM Bill, 2015 in coming monsoon session, PGDM institutions will face crisis of identity.  Outside and inside India, there will be doubts about credibility, validity and acceptability of these programmes among recruiters, admission seekers and foreign universities.

Summing up the proceedings of the meeting Dr H Chaturvedi, Alternate President, EPSI and Director, BIMTECH said “All out efforts will be made during the next one month to convince MHRD about granting degree conferring power to PGDM institutions.  MHRD can think of granting Deemed to be university status to all those PGDM institutions which fulfill the criteria for getting this status.”

Ministry of HRD, Govt of India has been contemplating the idea of introducing the awaited IIM Bill in Parliament to enable IIMs to award MBA degree instead of Diploma to their passing out students. The statutory requirement will be to form a council on the lines of the council for IITs to oversee the functioning of IIMs.

According to media reports the draft bill has already been sent by the MHRD to the Union Cabinet on March 11, 2015. The bill proposes to create an over arching body headed by HRD Minister and Chairpersons and directors of all IIMs as members. It is said that the purpose of The IIM Bill, 2015 is mainly to benefit IIM’s graduates applying abroad for research opportunities and also helping IIMs to attract foreign students.
The proposed IIM Bill if passed and becomes IIM ACT, it  may put a question mark on highly rated PGDM programmes of top private B schools like XLRI, SPJIMR, MDI, BIMTECH, IMT, TAPMI and many more. It may create unfavourable situation putting the market validity of their PGDM programmes at loss. These B schools sustain on the basis of quality education they impart, have large alumni base and keep the PGDM education flag flying without any Government aid & funds.

If the Ministry of HRD also evolves the process of empowering these Private B schools by providing level playing field with IIMs to enable them also to award MBA degree to their passing out students, the PGDM B schools may get their serious concern addressed.

EPSI, a not for profit autonomous society with mandate from Universities and institutions as its members is the frontrunner to deliberate on the issues and concern to raise education quality and attain benchmark standards of the national and international level.

Apart from the objective to lay down standards and quality of educational programs EPSI also takes initiative with an objective to advise or represent to Government, Local Authorities, Bodies on the policies adopted by them in relation to governance of education, if such policies or measures have a bearing directly or indirectly on this sector.

Stay tuned to MBAUniverse.com for more updates on IIM Bill