MBAUniverse.com News Desk | :
June 15, 2015
IIM Bill 2015 going to take the shape of IIM Act 2015 after nod from Parliament may have many issues to address and one of them could be that it may not satisfy the international standards 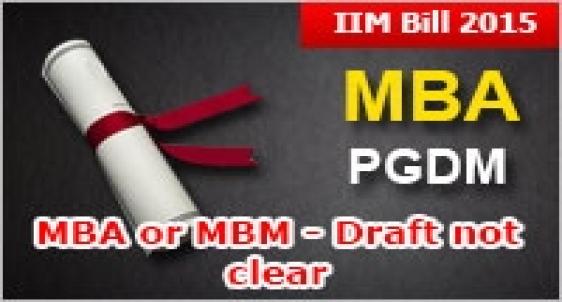 IIM Bill 2015 which has been put under discussion and is going to take the shape of IIM Act 2015 after nod from Parliament may have many issues to address and one of them could be that it may not satisfy the international standards. A petition to make the degree proposed to be awarded by IIMs at par with international standards has been submitted to the Prime Minister of India as well as to the Minister of Human Resource Development by the past and present students of highly ranked IIMs.

It is a known fact that majority of the top rated B schools in the world award MBA degree to their one year management programme as they offer admission to the candidates with not less than 2 years of work experience. However the IIM draft Bill 2015 of MHRD proposes to permit 13 IIMs in India to award MBA degree to their students of 2 years full time post graduate management programme. It may create anomaly in satisfying the global standard and despite completing 2 years flagship MBA at top rated IIMs, the candidate from these B schools will be treated at par with those who have done 1 year MBA from other B schools in the world.

The petition suggests changes in the proposed IIM Bill 2015  to bring parity at global standard before it becomes an Act and then seek amendments in future. Petition to Prime Minister Suggests that IIMs should award Masters of Business Administration (MBA) for one-year programme and Masters in Business Management (MBM) for 2 year programme

International Accreditation Agency Association of MBAs (AMBA) considers these 2 years courses as pre-experience MBM while the 1 year management programmes with the admission eligibility criterion of work experience get the international accreditation as full time MBA. Accordingly IIMs may lose their global competitiveness if this aspect is not taken into consideration by MHRD.

Since the prime concern of MHRD through IIM Act 2015 is to equip IIMs with the power to award MBA instead of PGDM so that they could be at par with global standard, the points raised in the petition and the suggestions made by the highly placed alumni and the present students of various IIMs need a re-look to the draft IIM Bill 2015. MHRD should review all the suggestions that further strengthen the global position of degrees proposed to be awarded by the IIMs from next year.

It has been a long cherished dream of IIM passing out students to get MBA from their IIM, making it globally acceptable without getting supported with a parallel certificate. If the dream comes half-true and still lag-behind on global platform in building their career, entire exercise of MHRD may go futile.

The IIM Bill 2015 which has already been placed before the Cabinet is proposed to be introduced in Parliament with the aim to empower all the IIMs to award MBA degree instead of Diploma in Management. So far IIMs are neither affiliated to any University nor have been declared a deemed to be university and hence cannot award MBA degree as of now. The bill, if introduced and passed in parliament will become IIM Act 2015 and will benefit 4500 students of  20 IIMs (13 present and 7 proposed) every year as their students will be bestowed with an IIM-MBA degree instead of Diploma.

None of the present 13 Indian Institutes of Management (IIMs) award a Masters degree in Business Administration (MBA). All the IIMs award Post Graduate Diploma in Management (PGDM) and alongwith this diploma they issue a certificate that their PGDM programme is equivalent to an MBA degree to enable the passing out student to seek admission abroad in doctoral programme or apply for a job.

To maintain the credibility of management programmes offered by IIMs, MHRD should  re-consider the various points to be addressed and redrafted in IIM Bill 2015 before getting it passed in parliament.