MBAUniverse.com News Desk | :
January 28, 2016
Placement season 2016 at IIM Kozhikode continued the trend of increasing average salary being offered to the students at INR 17.1 lakhs per annum, a growth of 12% from previous year 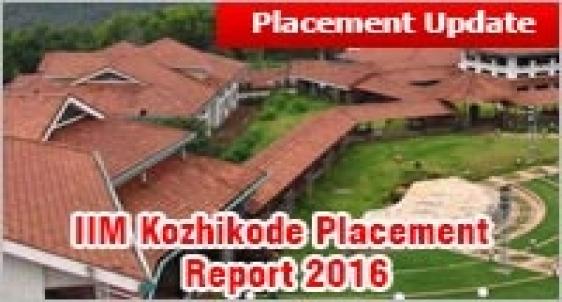 IIM Kozhikode has continued to live up to its name in the industry over the years. This had led to many first time recruiters willing to make offers on campus Prof. Kulbhushan Balooni, Director, IIM Kozhikode

It is the 18th batch of the Post Graduate Programme of IIM Kozhikode that has concluded its final placements in a record seven days. The season witnessed an increase in the number of recruiters visiting campus for the first time and students being offered niche roles. With over 119 recruiters and 370 offers, this year’s placements continued the trend of increasing average salary being offered to the students at INR 17.1 lakhs per annum, a growth of 12% from previous year. The highest domestic package was INR 37 lakhs per annum.

The recruiters who made offers to students for the first-time include 3M, Bank of America, Boston Consulting Group, Brand Accelerator, Capita, Caratlane, Credit Suisse, Ernst & Young, Frost and Sullivan, McKinsey, Mondelez, Paytm, Schneider and Shell among other companies taking the total of first-time offers to 100. This reinstated IIM Kozhikode’s standing in the industry with the major brand names participating in the process.

Releasing the final placement report on January 27, 2016, Prof. Kulbhushan Balooni, Director, IIM Kozhikode said, “IIM Kozhikode has continued to live up to its name in the industry over the years. This had led to many first-time recruiters willing to make offers on campus. The regular recruiters have continued to lay their faith in the capabilities of the students.”

Key Trends in placement 2016
IIM Kozhikode has a consistent record of excellent placement. Consulting roles continued to be the favourite among the student community with major consulting companies like Accenture Management Consulting, Avalon Consulting, BCG, CBC, Deloitte, EY, Frost and Sullivan, KPMG, McKinsey, PwC sharing a total of 99 offers. The domain has seen a major upward swing from previous year with a growth of over 16.5% in the number of offers and leading the charts by making offers to over 28% of the batch.

The season also saw an increase in the number & diversity of financial roles on offer with first time recruiters Credit Suisse and Bank of America sharing a total of 13 offers amongst themselves. With major companies like American Express, Axis Bank, Citibank, Deutsche Bank, Edelweiss, Fidelity, Goldman Sachs, JP Morgan Chase, Nomura, Yes Bank making offers to the candidates, the campus has seen an increase in on-campus placements in addition to the pre-placement offers already made to the students taking the count to 21% of the offers.

Recognizing the potential of students for the Leadership Programmes/Strategy domain, roles were offered by Aditya Birla Group, Airtel, Madura, Mahindra, Reliance, RPG, TAS, Tata Communications and others including many first-time recruiters like Brand Accelerator, LAVA, Mytrah, Paytm and the likes.

The Operations role saw the participation of Amazon, Capita, EXL, HCCB, Ola Cabs, Raymond, Shell, Tata Steel and TVS. There were multiple offers made by companies in the IT/ ITES and analytics profile including Asian Paints, Capgemini, Google, HCL GEM, HUL, Kirusa, Microsoft, Mindtree, Mondelez, Syntel, ZS Associates and the likes. Our regular recruiters like Cognizant Business Consulting, IBM, Infosys, TCS and Wipro continued to recruit from the campus for their IT/Analytics/Consultancy roles. There has been a good shift in the kind of roles being offered with students being recruited across various domains. The campus has been metamorphosing with the changing industry trends with the students adapting to industry requirements.

Sharing the highlights of Placement 2016 at IIMK, Prof. A.F. Mathew, Chairperson Placements, said, “The culmination of the Final Placements for the batch has been on an excellent note. We were able to give diverse opportunities to all students by bringing many branded companies in every cluster. The students have far exceeded the expectations of the recruiters which resulted in a large number of new recruiters visiting campus. This has led to IIM Kozhikode setting a benchmark in the industry for years to come.”

Started in 1997 with its Postgraduate Programme (PGP) comprising 42 students, the Indian Institute of Management Kozhikode (IIMK) today has a batch strength of 356 odd students. The B-school is on a high growth trajectory today, offering widest range of academic programmes in the field of management education. These include Fellow Program in Management, Executive PG Programs, Management Development Programs and Faculty Development Programs. IIMK set up a Satellite campus at Infopark, Kochi, in 2013 dedicated to Executive Education.

IIM Kozhikode has announced the shortlist of candidates for flagship PGP 2016-18 batch on the basis of CAT 2015 result declared on January 8, 2016. The minimum qualifying score sectional as well as overall in CAT 2015 to be eligible to get shortlisted by IIM Kozhikode has been fixed as 90 overall and 80 sectional percentile. The actual percentile score in shortlisting has gone much higher than prescribed.