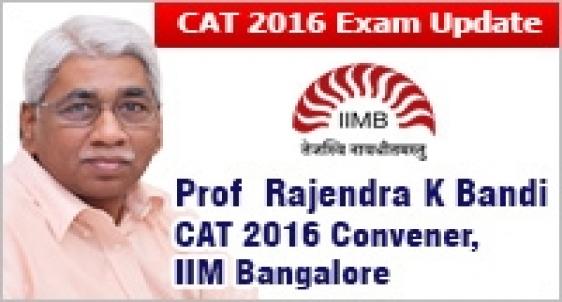 Since IIM Bangalore is known for its different academic approach, it is expected that more changes would be effected in CAT 2016

Indian Institute of Management (IIM) Bangalore one of three top rated IIMs and the top ranked B school in NIRF Ranking 2016 is going to conduct CAT 2016. Prof Bandi is going to convene CAT 2016 without any change in testing partner agency TCS.

MBAUniverse.com was the first to break the news and chose to congratulate the Prof Bandi who is yet to revert. More updates are expected shortly after CAT 2016 group meeting. Committed academician and able administrator clubbed in one is what Prof Rajendra K Bandi is who may bring about more effective changes in CAT 2016. It is very much possible that CAT 2016 test takers may find yet another improved and aspirant friendly CAT 2016 in the month of October/November 2016.

More CAT 2016 takers expected
Common Admission Test (CAT) 2016 is the mandatory exam for admission to management programmes at IIMs and other top B schools in India. In CAT 2015  number of candidates who registered for the exam were 2.18 lakhs while the actual test takers were 1.80 lakhs.

With the increased number of intake in IIMs and other B-schools, it is expected that more candidates may appear in CAT 2016.

This is the first time since CAT has gone green and has adopted the computerised exam format in 2009 that IIM Bangalore has been assigned the responsibility to convene CAT 2016.

His Publications, case studies and reviews are widely read, referred and quoted across the globe.  His significant publications include  "Putting People First"; "Passive Piracy: Why Pirates Are Not Necessarily Potential Buyers of Digital Products"; "Service Delivery in Remote Technical Support Services: A Business Process Outsourcing Case"; "The employment perspectives of source and recipient countries in global sourcing of financial services" Presentation at ILO Tripartite Seminar on Social Dialogue on Global Sourcing in Financial Services for Selected Countries from Asia and Pacific plus the United Kingdom, New Delhi, India, 23-25 November 2005; "An exploratory study of knowledge contributing & seeking behaviors through knowledge repositories"; "Jobs on the Move: De-localisation and Relocation of eWork - Discussion", IIMB Management Review, Volume 17, Number 2, June 2005; "Internationalisation of Employment: A Destination Country Perspective" Workshop on The Internationalisation of Employment: Challenges for a Fair Globalisation, Annecy, France, 11-12 April 2005, hosted by ILO, Geneva.

The process of change in CAT began in 2014 and in 2015 the test was totally transformed. Now since IIM Bangalore is known for its different academic approach, it is expected that more changes would be effected in CAT 2016.

CAT 2016: IIM Bangalore takes over from IIMA; Will Convene Exam this year