MBAUniverse.com News Desk | :
August 9, 2019
CAT is the Common Admission Test conducted by IIMs for admission to their various MBA/PGDM programmes. CAT has gone through number of changes during past few years. It is now a computer based test and is conducted in a single day in two sessions separately. Apart from 20 IIMs, other top MBA colleges like FMS Delhi, MDI, SPJIMR, IMI, IMT, IITs, IISC also accept CAT as the basis for admission to their management programmes 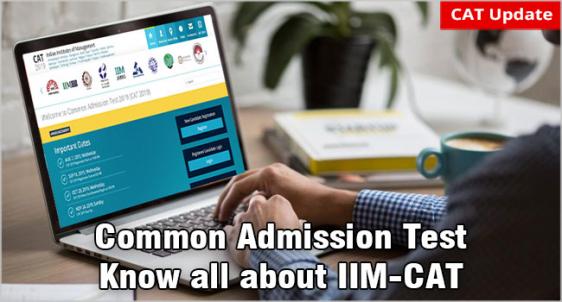 CAT is the Common Admission Test for admission to MBA/PGDM programmes in 20 Indian Institutes of Management (IIMs) and other top MBA colleges like FMS Delhi, MDI Gurgaon, SPJIMR Mumbai, IMI New Delhi, IMT Ghaziabad and hundreds of other top MBA colleges in India. More than two lakh candidates appear in CAT every year to explore admission opportunity in MBA programmes offered by IIMs and other top B-schools.

IIMs offer admission on the basis of CAT only. They do not accept any other test score. There are more than 150 cities and more than 400 venues where CAT is conducted in India.

Apart from being the most important entrance test for the 2 years full time graduate management program (MBA/PGDM), Common Admission Test (CAT) is the gateway for one year MBA programmes in IIMs and other prominent management institutes.

With effect from 2012, Indian Institutes of Technology (IITs), Indian institute of Science (IISC) have also started accepting CAT for admission to their Management programmes instead of JMET.

When is CAT Conducted?
Common Admission Test (CAT) is conducted annually. It is now conducted preferably on the last Sunday of November or the first Sunday of December every year. With effect from 2015, CAT is conducted on a single day in two sessions – morning and evening.

Prior to 2015, Common Admission Test was conducted in multiple sessions on multiple days.

Who Conducts CAT?
Common Admission Test is conducted by one of older IIMs by policy of rotation each year. There are six IIMs who conduct CAT one by one, they are IIM Ahmedabad, IIM Bangalore, IIM Calcutta, IIM Indore, IIM Kozhikode and IIM Lucknow. Since other 14 IIMs were established later, the responsibility to conduct CAT has not yet been assigned to any of them.

Mode of CAT
CAT is a computer based MBA entrance test of three hours duration with 100 questions divided in three sections and has an individual time limit of one hour for each section.

Before 2009, CAT was a paper based test. On May 1, 2009, it was announced that with effect from 2009, CAT would be a Computer based test. American firm Prometric was entrusted with the responsibility of conducting CAT for 5 years from 2009 to 2013.

However, the first computer based CAT confronted many technical glitches like server slow down, blurred system display among others. At many test centres CAT had to be conducted again.

In 2014, the responsibility of testing agency to conduct CAT was assigned to Tata Consultancy Services (TCS). Since then, TCS has remained the partner testing agency for IIM-CAT.

CAT Pattern
Since 2015 CAT has been following the same pattern, time duration, number of questions and sections. Common Admission Test is divided into three sections comprising 100 questions (34 from Quantitative Ability (QA), 34 from Verbal Ability and Reading Comprehension (VARC), and 32 from Data Interpretation and Logical Reasoning (DILR)).

Earlier CAT used to have 60 questions divided in two sections and had only MCQ type questions with 1/3 negative marking.

When to look for CAT?
IIMs release all the details about Common Admission Test in leading news papers on the last Sunday of July every year. A day before this publication, the CAT convener sends the press release with important details about CAT on the designated web portals. The process to appear in CAT starts in the 1st week of August.

How difficult is CAT?
Common Admission Test is a highly competitive and most important MBA entrance exam in India. The difficulty level of CAT is considered moderate to high.

Scoring Process in CAT
Each correct answer in CAT is awarded with 3 marks. The raw score obtained in CAT is converted to scaled score and then converted to percentile score after allowing for equating and normalizing the scores for both the sessions in CAT.

IIMs and other top MBA colleges consider percentile awarded in CAT to shortlist the candidates for final selection round.

When & How to Apply for CAT?
The very first thing to remember about CAT is that there is no offline process now in Common Admission Test. You can apply online only on the official CAT website. The application fee for CAT has also increased to Rs.1900/- for General candidates and to Rs.950/- for SC/ST candidates. It should also be paid online only.

The application process for CAT opens in first week of August every year and closes in the third week of September. During this period you can submit your application online for Common Admission Test.

Important Changes in CAT over the Years
Journey of IIM-CAT has witnessed substantial changes. In recent years, number of sections and type of questions in Common Admission Test have changed substantially. Important changes in pattern and conduct of CAT are shared below: