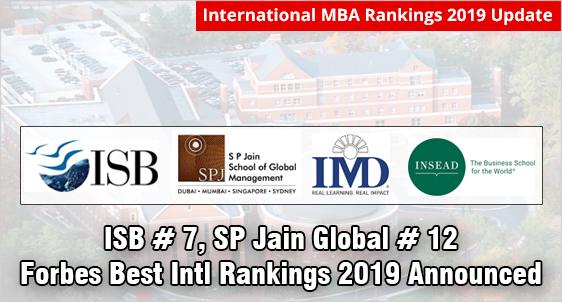 ISB has also been placed as the top-ranked B-School from Asia among all the Business schools surveyed. This is the first time that ISB has participated in Forbes rankings.

Forbes ranks the B-schools solely on their “5-year MBA gain.” It represents the net cumulative amount the typical alumni would have earned after five years by getting their MBA versus staying in their pre-MBA career.

Commenting on the recognition, Professor Rajendra Srivastava, Dean, ISB said, “We are delighted to be a part of the Forbes Best Business School 2019 rankings, and it is a pleasure to see ISB’s PGP gaining more and more recognition globally. These rankings speak of the value that ISB’s MBA brings to the table for both our students and the corporate world.”

Happy with its improvement on the Rankings, Nitish Jain, President of S P Jain Global said, “We are thrilled to have climbed in the Forbes MBA rankings this year, especially as these rankings are student-focused. Since 2011, our Global MBA has consistently featured in top MBA rankings by the Financial Times, Forbes and The Economist.”

Forbes’ biennial ranking of the world’s best 1-year and 2-year international MBA programs is based solely on the return on investment achieved by business school graduates. This year, the Forbes ranking compared the earnings of the Class of 2014 in their first five years post-MBA. The Forbes MBA rankings, along with the Bloomberg BusinessWeek, Financial Times and The Economist, are considered among the most prestigious MBA rankings in the world.

Stay tuned to MBAUniverse.com for more updates on MBA Rankings