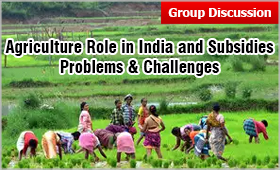 There has been a lot of discussion on the poor state of farmers in India. Farm loan waivers by the newly elected Congress governments in Madhya Pradesh, Rajasthan and Chhattisgarh have hit the national headlines. According to a report published in MINT newspaper on January 22, 2019, Indian Government is considering a plan to transfer cash to farmers instead of offering subsidies on various agricultural inputs. “The government is planning to club all farm subsidies including fertiliser costs and instead pay farmers cash…,” notes the article. The plan for the handout comes after the Bharatiya Janata Party was voted out in key state elections last month, forcing the government to draw up a course correction before federal polls due by May.

Given the size and the dismal state of Agriculture in India, this is a hot Group Discussion topic for MBA admission. MBAUniverse.com presents an indepth analysis of this MBA GD Topic that analyses the current state, problems and solutions.

Agriculture in India: 50% Population Generating 17% GDP
Agriculture contributes to 6.4% of the total world’s economic production. China is the largest contributor followed by India accounting for 19.49% and 7.39% of the total agricultural output respectively. India is the first and foremost an agriculture-based economy with 47% of its working population employed in the agriculture sector while China employs only 29.5% of its population in agriculture. With about half its population employed in agricultural activities, this should be a prominent source of India’s GDP if not the main source. In India, agriculture constitutes 17.32% of GDP as per 2018 data and this value has remained somewhat constant since 2011.

Problems & Issues of Agriculture in India

Agriculture Subsidy: Keeping Farmers Dependant
The biggest dilemma with the subsidies offered to farm sector is that they do not reach 100% to the farmers. While the intention of the Government offering subsidy on seeds, fertilizers, irrigation is not questioned, its implementation remains faulty and the middlemen involved in it usurp a major part of the subsidy amount. Besides, the agriculture subsidy makes the farmer dependant till the subsidy is received from the relevant agency. This is the reason that Government of India has decided to evolve a mechanism to transfer cash directly in farmers’ account instead of payin g subsidy of giving loan waiver. This will help the farmer to reduce the financial burden and buy the required inputs for the crop as per his choice.