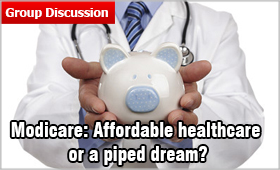 The current BJP government under the leadership of Narendra Modi has been very active in announcing new schemes and publicizing its policies. A slew of policies such as demonetization, Jan Dhan, Swach Bharat, Make in India etc. have been initiated and implemented in the past four years. The efficacy and success of these policies remains a debatable issue. One such policy is the “National Health Protection Scheme”, which was announced on 1 February 2018. To provide you insights on this policy for your GD PI preparation we have prepared an overview of it.

In the Union Budget 2018-2019, under the Ayushman Bharat Yojna, Arun Jaitely, the Finance Minister of India, unveiled a new flagship National Health Protection Scheme. The plan was soon dubbed as "ModiCare" by Arun Jaitely and thereafter gained popularity. The plan is said to be the world's largest healthcare programme.

Modicare has drawn immediate comparisons with the former US President Barack Obama's Patient Protection and Affordable Care - also known as Obamacare. Obamacare is the unofficial name for the Patient Protection and Affordable Care Act, a health reform law signed, by President Barack Obama. The main focus of the programme is to provide more Americans with access to affordable health insurance, improve the quality of healthcare and health insurance, regulate the health insurance industry, and reduce health care spending in the US. Though Modicare has been initiated on the same lines as Obamacare however there are a few differentiating factors such as:

Arguments in support of the scheme:

Arguments against the scheme: